Miss Peregrine’s Home for Peculiar Children by Ransom Riggs is the  unusual story of fifteen-year-old Jake Portman who travels to Wales to find out the truth about his much-loved grandfather.

Growing up, Grandpa Portman was the most fascinating person I knew. He had lived in an orphanage, fought in wars, crossed oceans by steamship and deserts on horseback, performed in circuses, knew everything about guns and self-defense and surviving in the wilderness, and spoke at least three languages that weren’t English.

I had a grandfather like that. Well, at least to me, he seemed like the most exotic person ever. When I was a kid, I believed he’d been to every single country in the world. He’d been a Chief Petty Officer with the Royal Navy in the war and then worked on the tugs with the Coast Guard. He knew sea shanties and dirty jokes (which he only ever told to my brothers) and had tattoos on his arms back when they meant something. I loved being in his company.

Jacob’s grandfather had been born in Poland but shipped to Wales when he was twelve because “the monsters were after him. Poland was simply rotten with them.” It seems obvious that Mr. Portman is talking about the Nazis, and he is – but there are other monsters lurking. In Wales, he comes under the care of Miss Peregrine, a most unusual woman – as it turns out – who was also responsible for the children in Grandpa Portman’s fabulous stories. These children could do amazing things: fly, make fire, turn invisible. Grandpa Portman even had pictures of some of them. These pictures, many of which are included in the book, create a degree verisimilitude for the narrative. (The pictures have actually been culled from private collections) 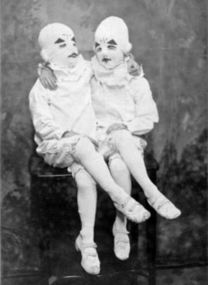 But then something horrible happens to Grandpa Portman and Jacob is intent on finding the answers to many of the questions his grandfather leaves behind so he convinces his father to take him to Cairnholm Island, off the coast of Wales.

Nothing could have prepared Jake for what he finds there. The island is caught in time and Jake soon finds himself believing in things he never really thought possible. Miss Peregrine’s Home for Peculiar Children is a coming-of-age tale, an adventure, a love-story. It’s sad and funny and creepy. And as an allegory for the horrors of  the Holocaust – it works very well indeed.

Tim Burton is directing a movie version of this novel – can’t think of anyone better to capture the novel’s strange and wonderful story.