Like everyone else in the free world, I watched the recent American presidential election with my heart in my throat. I finally put my phone down at around 12:30 a.m. on the night of the election feeling pretty certain that the impossible had happened. I woke up a handful of hours later and my fears were confirmed.

Back in the day I used to watched The Apprentice. We’d mock Trump as he got off his private jet, that impossible hair flapping in the wind, his mouth like a little anus. He just seemed like a caricature. And now he’s the president of arguably the most powerful country in the world. It’s a terrifying notion to a left-leaning person like me. I hope Trump will surprise us, but I still don’t think he’s qualified for the job. 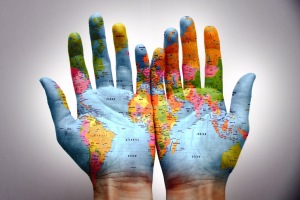 I have to admit that I was feeling a little smug because, y’know, I’m Canadian and Justin Trudeau is our Prime Minister. He’s not perfect, certainly, and we’re not perfect as a nation, but c’mon. And then Kellie Leitch, one of the people running for the leadership of our national Progressive Conservative Party (as if the national  PC Party is actually ‘progressive’) hitched her star to Trump’s wagon saying we needed to vet our immigrants more carefully. Seriously? I blame Stephen Harper for creating a climate where someone could say something like that in a country that was freakin’ built by immigrants. (Okay, truthfully, I blame Harper for lots of things; I just don’t like the man.)

All the vitriol has me thinking about the world – which is in dire need of some perspective. And some hope. And where do we get it?  Books.

One of the things I always tell my students is that reading allows us to walk in someone else’s shoes.  How can we be sharing this planet and not understand that, fundamentally, we are the same, not different? Sometimes we all live in our own little bubble – me included –  and so we only have a couple options to help us see over our own personal walls: travel and books. I love both, but traveling is expensive, so I guess it’s books (and truthfully, the way I buy books – also expensive).

I thought I’d share some books that might help you see your fellow human differently. If we can’t (try to) understand each other, if we’re not open to listening to someone else’s point of view – even if we don’t agree, if we don’t at least grasp the concept that we are all in this together or we all suffer, well, we’re doomed. I’m a glass half full sort of person, so I would like to believe that perhaps Trump’s victory is a wake-up call to us all that the world is on a precipice. We can either take a step back in love or jump off into the abyss with hate.

These books are about experiences I have never had and all of them got me to ask questions and see people and countries in a new way. Some made me uncomfortable, some made me feel ignorant and blind. All of them were profoundly moving. If we are going to make this world better we need to practice our empathy skills. Books help with that. As Atticus Finch so wisely put it, “You never really understand a person until you consider things from his point of view … until you climb into his skin and walk around in it.”

So go on. Start walking.

The Cellist of Sarajevo – Stephen Galloway

Spend a few hours with Kenan as he braves the streets, making a treacherous journey to the brewery to collect fresh water for his family. He’s a father who only want to keep his children safe, feed and clothe them.

Reading Arn’s story has reminded me again of the priviledged life I’ve lead and of the absolute power of literature to crack open the insulated world in which we often live.

I was the age of these characters somewhere around 1976. I didn’t know anyone who was gay. Okay, looking back – of course I did, but we didn’t talk about it. It wasn’t acknowledged. As far as I know, they weren’t out. I am profoundly grateful as a teacher and a parent, just as a human being, that books like this exist.

Liesel is extraordinary. She and Hans bond late at night, when Liesel’s nightmares wake her, and Hans teaches her to read. Books and words are central to Liesel’s story. So is her friendship with Rudy, the boy next door. Through their eyes we see Hitler and Nazi Germany; we experience the atrocities and the small kindnesses. Zusak’s story is mostly about everyday things: hunger, pettiness, laughter, hope, cruelty and kindness.

For me, though, this is a book about love- how it shapes us and changes us, how beauty transforms and transports and how you just might take a risk if you thought it might be your last opportunity to do so.

Joe is totally self-aware. It’s one of the pleasure of Totally Joe, really, that he is a person who understands and accepts himself. That doesn’t mean he’s not susceptible to the taunts of others.

When the fighting starts in Iraq, Alia feels compelled to save the books in the library. When she can’t get her own government to help her, she starts moving the books herself.

Everything I Never Told You – Celeste Ng

Everything I Never Told You is an astounding, complex and heart-breaking look at the secrets we keep, not only from our families but from ourselves. Why we keep them, and the damage caused because of it, is just part of what happens in Ng’s book.

5 thoughts on “Books for what ails you”