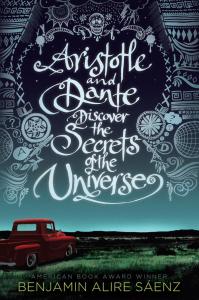 Aristotle (Ari for short) is a 15-year-old Mexican American living in Texas in 1987. He’s bored and miserable and pretty much hates his life.

Dante is also 15, and also Mexican-American, but he’s “funny and focused and fierce.” Ari says “there wasn’t anything mean about him. I didn’t understand how you could live in a mean world and not have any of that meanness rub off on you. How could a guy live without some meanness?”

Aristotle and Dante meet at the local pool where Dante offers to teach Ari how to swim. “All that summer, we swam and read comics and read books and argued about them.” It’s the beginning of beautiful friendship, something that Ari seems to desperately need.

Feeling sorry for myself was an art. I think a part of me liked doing that. Maybe it had something to do with my birth order. You know, I think that was part of it. I didn’t like the fact that I was a pseudo only child. I didn’t know how else to think of myself. I was an only child without actually being one. That sucked.

Ari has older twin sisters and an older brother who is in prison. He was born after his father returned from serving in Vietnam.

Sometimes I think my father has all these scars. On his heart. In his head. All over. It’s not such an easy thing to be the son of a man who’s been to war.

I was the age of these characters somewhere around 1976. I didn’t know anyone who was gay. Okay, looking back – of course I did, but we didn’t talk about it. It wasn’t acknowledged. As far as I know, they weren’t out. I am profoundly grateful as a teacher and a parent, just as a human being, that books like this exist. Alire Sáenz has written a story about boys who are smart and fragile and flawed. I admit it – I got teary a few times reading this book.

What are the secrets of the universe? As Ari discovers “we all fight our own private wars.”

This is a beautiful book and I highly recommend it.