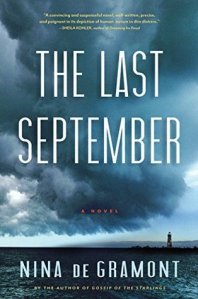 her best friend, Eli. She and Eli are students in Colorado and one stormy night they attend a party and Charlie is there, too, his flight delayed because of the storm.

That day, the first day I ever saw him, he had three days’ worth of stubble. He wore a thin black thread around his neck, beaded with a smooth lapis stone that matched the color of his eyes.  When I looked at him, his lips slid up at the corners. My heart lurched. I don’t know why. It lurched toward him and refused – stubbornly – to ever lurch away.

Nina De Gramont’s book The Last September takes zero time to hook you by the throat and it doesn’t let you go until the very end. I really couldn’t put this book down. On the surface it’s a love story. But it’s a love story that goes horribly wrong because by the end of the first sentence we learn that Charlie is dead. Brett tells us “Because I am a student of literature, I will start my story on the day Charlie died. In other words, I’m beginning in the middle.” By the end of the first page we’ll know that Charlie has been murdered.

Their love story unfolds in flashback. When the novel opens, Charlie, Brett and their toddler daughter, Sarah, are living in Charlie’s family cottage at Cape Cod Bay. Brett is finishing her PhD dissertation; Charlie is doing odd jobs.  On this particular day, Brett is frustrated with Charlie, a feeling not at all out of place in most marriages. When Charlie mentions that Eli had called and that he wanted to come for a visit, Brett is reluctant to see her old friend because “the last time we saw Charlie’s brother he’d dropped an enormous amount of weight and begun scribbling notes on his jeans and forearms.”

I have guilty reading pleasure buttons and, I have to say, The Last September hit every single one of them. Angsty love affair. Check. Unbearable suspense. Check. Heartbreak. Check. Check.

What happened to Eli? What happened to Charlie? What happens when Ladd, Brett’s former fiancé arrives back in town? If this sounds suspiciously like Peyton Place, you’re not wrong. But, omg, The Last September is so much fun to read. The writing is luminous and so even when I didn’t 100% buy the plot twists, it didn’t matter because I just wanted to find out what had happened to Charlie and I wanted to know that Brett was going to survive the grief.