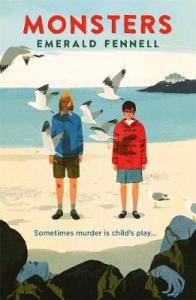 What would you get if you mixed Enid Blyton with Stephen King? I think you’d probably get Monsters by Emerald Fennell.

Monsters is the story of a twelve-year-old girl who has spent the last three summers at her Aunt Maria and Uncle Frederick’s crumbling seaside hotel because her “parents got smushed to death in a boating accident.”  The unnamed narrator now resides with her maternal grandmother and “During the summer holidays, Granny always decides she has enough of me…” That’s how she ends up in Fowery, somewhere on the Cornish coast of England.

The town of Fowery is as eccentric as its residents, a “tiny multicoloured town…built up the side of a green, green hill” and ruled by William Podmore, a recluse who is rarely seen.

Everyone in town knows our narrator – she’s a regular visitor to the candy store and book shop. She knows they think she’s peculiar. And she is. She’s fascinated with murderers and she and her grandmother often watch gory films together. She’s practically memorized The Murderers’ Who’s Who. So she hits the creepy jackpot when the body of a woman is found caught in a fisherman’s net. Suddenly, the summer is starting to look up.

Then thirteen-year-old Miles arrives with his over-bearing mother. Turns out  Miles has a lot in common with our narrator:  he’s fascinated with true crime, a little on the eccentric side and he’s smart.

I really enjoyed Monsters. It’s quite unlike any recent YA book I’ve read.  I was a big reader of Enid Blyton’s books when I was a kid. I loved solving the mysteries in the Adventure series. Fennell’s book is certainly more subversive than Blyton’s books – which were straight up mysteries a la The Bobbsey Twins. Monsters is decidedly darker.

This time instead of being strangled, the victim was drowned. Miles would push me under the water, and I would have to thrash around, yelling and screaming, begging for my life.

If this sounds a little twisted, it is. Monsters is a page-turner with an extended cast of characters ripped straight from a Tim Burton movie. It is odd and oddly fun.