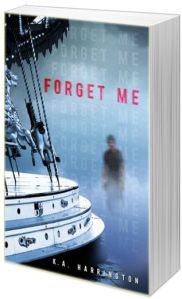 Morgan lives in River’s End, a small town in central Massachusetts. While once prosperous, “the town’s only major employer, Stell Pharmaceutical’s, went under [and] several other businesses that relied on Stell soon followed.” That meant that both of Morgan’s parents (and almost everyone else in town) lost their jobs as biochemists and River’s End is a bit of a ghost town.

When K.A. Harrington’s YA mystery Forget Me opens, Morgan is on her way to a party when she happens upon her boyfriend, Flynn, standing on the side of the road. He hadn’t been able to go to the party because of plans with his parents, so Morgan is surprised to see him.  It’s clear that Flynn is a bit of a mystery man; Morgan admits she is “the only one he ever voluntarily talked to.” Still, Flynn’s behavior is particularly jittery and when Morgan  presses Flynn for an explanation, he breaks up with her. She watches him walk away and then – shockingly – Flynn’s hit by a car.

Flash forward three months and Morgan is still trying to come to terms with Flynn’s death when she agrees to her best friend Toni’s suggestion to create an on-line memorial for Flynn. When she uploads a picture of Flynn onto her FriendShare (like Facebook, I guess), the program wants to tag the picture as someone else, a guy named Evan Murphy. When she does a little investigation, it appears as though Evan Murphy and Flynn are one and the same and Flynn appears to be very much alive.

Forget Me is a terrific little YA mystery that will keep readers guessing. Morgan is smart and tenacious and readers will be rooting for her to get to the bottom of Flynn’s death (?). There is the potential for the machinations to get clunky or convoluted, but Harrington avoids both. The plot clicks along, clues are revealed in a timely fashion and readers should be wholly satisfied with the outcome.