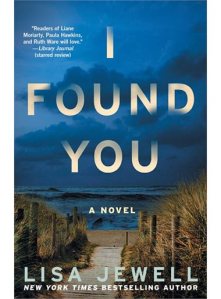 In present day, Lily Monrose’s husband is missing. Newly married, Lily is frantic to find the man she loves, the man who came “home with gifts, with ‘two-week anniversary’ cards, with flowers.” Her husband, Carl, is “certainly never more than a minute late,” but he’s seemingly just vanished.

Alice Lake is a single mom with three kids who lives in a ramshackle cottage by the sea in Ridinghouse Bay. One day, from her window, she spies a man sitting on the beach.

He’s been there all day, since she opened her curtains at seven o’clock this morning, sitting on the damp sand, his arms around his knees, staring and staring out to sea.

Finally, Alice goes out to see if the man is okay and he admits “I think…that I have lost my memory…Bcause I don’t know what my name is. And I must have a name.”

Alice invites him in to her home and together they try to uncover who he is and where he came from.

In 1993, we meet Gray, 17, and Kirsty, 15, who are staying Rabbit Cottage in Ridinghouse Bay with their parents. They are on holiday, enjoying their family time when they meet Mark, a boy just a little older than Gray and for whom Gray takes an immediate dislike.

When Mark stops to chat to the family on the beach, Gray notes that the

smile on his face [looked] to Gray suspiciously like triumph. As though this ‘spontaneous’ conversation with his family was not just a passing moment of friendly human interaction, but the first brilliant stroke of a much bigger master plan.

Gray is right to be wary.

From these seemingly unconnected threads, British writer Lisa Jewell weaves an often riveting account of family, love and obsession. Although I was less interested in Lily’s situation – something about her irked me – I was wholly invested in Gray and Kirsty.  Their relationship was really believable and their part in the story provided the most heart-pounding moments.

As for Alice and her mystery man, well, obviously I don’t want to spoil anything. Alice is a likeable character, kind-hearted  and slightly reckless. As they work to peel back the layers of missing memory, the threads of this story start to come together. I found some of the machinations a bit clunky, but overall I Found You had me turning the pages way past my bedtime.