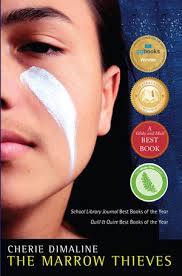 Gah! This book, you guys.

Francis, though everyone calls him Frenchie, is on the run from the “recruiters”.  Pretty much every Indigenous person is because their bone marrow holds the key to dreaming, which is something white folks no longer have the ability to do.

“Dreams get caught in the webs woven in your bones. That’s where they live, in that marrow there.”

“You are born with them. Your DNA weaves them into the marrow like spinners….That’s where they pluck them from.”

It’s sometime in the not too distant future and we’ve pretty much wrecked the Earth. Because of course we have. When Cherie Dimaline’s YA novel The Marrow Thieves opens, Frenchie is holed up in a tree house with his older brother, Mitch. But then the recruiters show up, and the boys are separated, and Frenchie finds himself on the run once more.

The characters in The Marrow Thieves are all too aware of their rocky history with the Canadian government, and sharing those stories is part of what keeps them focused on getting to safety, which in this case is north where they hope they will find fresh water and clean air and freedom.  So north is the direction Frenchie heads and it isn’t long before he meets a group of travelers. Frenchie joins this ad hoc family and his adventure begins.

The dystopian nature of this novel is really only the story’s framework. It’s enough to know that these people are considered ‘other’ and useful only for what they can provide to the government. Their current plight mirrors the whole residential school debacle, a part of my country’s history, I am ashamed to admit, I was grossly ignorant of until recently.  Those places were less about assimilation (and even that is abhorrent)  and more about annihilation.

The real story, the heartbeat of Dimaline’s novel, is the characters and their stories – both individually (which they tell in their own ‘Coming-To’ stories) and collectively. Getting to know these people felt like a privilege; I fell in love with them and the way they looked out for each other. I experienced a real fear for their safety and on the few occasions they were rewarded with something good, I felt that, too.

I will not forget these people, their connection to the Earth and each other, for a long time. The Marrow Thieves should be required reading for all Canadians…and, trust me, once you start reading, you won’t want to put it down anyway.