A Lite Too Bright  is a crazy good debut YA novel by Samuel Miller.  I bought the book 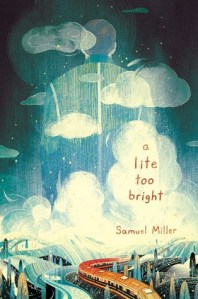 because I loved the cover and it had lots of praise from media outlets, not other YA writers (I never trust those, really). I wish that I had read the novel in one or two sittings because it deserves that kind of attention, but I enjoyed the book anyway.

Arthur has recently suffered some sort of crisis which requires him to come stay with his Uncle Tim and Aunt Karen in Truckee, “one of those places you go when you’ve thrown in the towel on doing anything extraordinary in your life.”  Arthur’s life has fallen apart, the details of which are only alluded too in visions of him crashing his Camaro into a body of water and feeling himself “floating, untethered by gravity.” Whatever has happened, he’s been removed from the scene of the crime in Palo Alto, perhaps in the hope that he can get himself sorted out.

There’s clearly some family dysfunction. Aunt Karen wants to send him off to some Christian wilderness camp. His father and brother are trying to figure out out to handle what is left of their father’s estate –  which has sustained the brothers but is now beginning to run out.

Arthur Louis Pullman III was something of a literary legend, a sort of Harper Lee-like character who only ever wrote one book, albeit a famous one. At the end of his life, he suffered from Alzheimer’s and he died a week after he disappeared from his home.  A Lite Too Bright follows Arthur I as he attempts to recreate his grandfather’s final week after he discovers what he believes is a clue left specifically for him.

Miller’s novel is an ode to writing, to family, and to living a full and complete life. It’s also a road trip novel, with a complex mystery at its core. Young Arthur is an engaging narrator, desperate to find his grandfather, not in the literal sense, of course, but to understand him, and as he embarks on this journey he discovers that other people are intent on getting close to Pullman Sr., too. As Arthur retraces his grandfather’s last steps, he also comes to terms with his own trauma.

Arthur’s  journey is well worth taking.