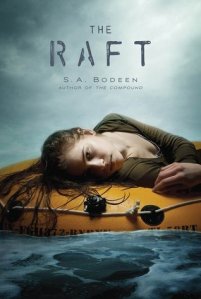 Robie, the fifteen-year-old protagonist of S.A. Bodeen’s YA novel The Raft has been back and forth between Hawaii and the island of Midway dozens of times. She lives there with her research scientists parents, but when the novel opens she’s visiting her aunt in Honolulu. When her aunt is unexpectedly called to work on the mainland, Robie isn’t bothered about being alone. She’s used to it and knows how to look after herself.

Looking after yourself on 2.4 sqaure miles of island, as it turns out, is different from looking after yourself in downtown Honolulu. Unfortunately Robie gets accosted on the street one evening – nothing serious – but it spooks her and she decides to take the cargo plane home. Unfortunately phone and Internet service is spotty on the island and so Robie isn’t able to let her parents know she is coming home. Even more unexpectedly, the plane hits bad weather and goes down. Only Robie and the co-pilot, Max, survive.

This novel is terrific. Like, couldn’t-put-it-down terrific. Robie is resilient and smart and is able to cope with her circumstances better than people twice her age. The raft she floats in leaks, there are sharks in the water – and not much else. It’s impossible to imagine that Robie will make it, but she does.

I don’t want to say too much about the things Robie endures. Once you start reading The Raft you’ll find out pretty quickly because you won’t be able to stop turning the pages. I should also mention that Bodeen slips some compelling stuff about ocean and bird life, conservation and pollution into the mix and it all feels necessary and organic. Robie is at home in this environment and knows “more about ocean fish and seabirds than most post-graduate researchers.” It’s a good thing, too.

Bodeen’s prose is straightforward and Robie’s voice is authentic. In a moment of prescience she remarks: “Lately it seemed there were a lot more days when my life felt less  like luck and way more like suck.”

I’m not one for survival stories, really, but I enjoyed Robie’s tremendously.