The Headmaster’s Wife is my second outing with Thomas Christoper Green. I read his 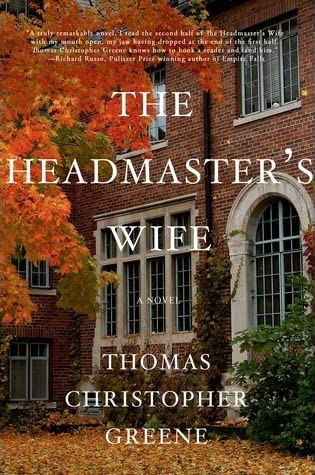 novel Envious Moon almost a decade ago. The Headmaster’s Wife has been on my tbr shelf for quite a while, and I read it in one sitting.

Arthur Winthrop is headmaster/Literature teacher at Lancaster School, an elite boarding school in Vermont. When we first meet him, he’s walking through Central Park reminiscing about a time he’d visited the park with his wife, Elizabeth, and their young son, Ethan. That was years ago, though. Now “standing on the same path…he gives up trying to find this memory.” Instead, he disrobes and starts walking. “All that matters to him is the feel of his bare feet crunching wonderfully on the crusty snow beneath him.”

Of course he is scooped up by the police, and in the interrogation room he tells the story of Betsy Pappas, a young student in his Russian Literature class. At first, Arthur is attracted to Betsy’s mind, but soon he becomes almost obsessed with her. The novel tracks Arthur’s increasingly desperate attempts to woo and possess Betsy.

At the halfway point – after a wallop of a revelation – the story switches its focus to Elizabeth Winthrop. Her story, about being a student at Lancaster, fills in some backstory and allows a glimpse into her marriage to Arthur. It also allows us to meet, however briefly, the Winthrop’s son, Ethan, whose own story is the catalyst for some of the drama in their marriage.

I don’t want to spoil anything because one of the delights of this books (if you can actually call a novel about grief ‘delightful’) is letting the pieces of this puzzle click together in their own time. This is a book that sort of reads like a mystery, but isn’t that what life is at the end of the day? An unfathomable mystery.

Greene suffered a personal tragedy while writing this book. It’s highly worth reading his acknowledgments if this is something you generally skip when you read.