Sometimes I can’t resist the three for $10 bargains at Indigo. Just because a book finds its way onto the bargain shelves doesn’t mean it’s a dud. Case in point: My Sunshine Away  I managed to snag a handful of bargain copies for my classroom library and I was thrilled to be able to offer it as a choice for my grade 12 students this year. That is an amazing book. 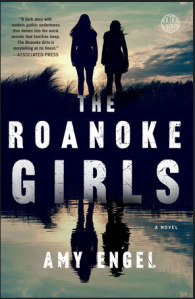 And then there’s The Roanoke Girls by Amy Engel. Can’t remember when I bought it or how long it’s been languishing on my tbr shelf, but I started reading it and finished reading it in just a few hours because it has ALL THE THINGS I love in a book.  (Lots of other reviewers loved all the things, too, because this book received lots of well-deserved praise.)

Lane Roanoke is fifteen when a terrible tragedy brings her to small-town Kansas to live with her grandparents, Yates and Lillian, and her cousin, Allegra, who is also fifteen.  She knows very little about these people. Her mother left the family home as a teenager and never returned because her life there was a “nightmare.”

Lane is mesmerized by the family home

Roanoke had clearly started out as something resembling a traditional farmhouse – white clapboard, wraparound porch, peaked dormers. But someone had tacked on crazy additions over the years, a brick turret on one side, what looked like an entirely new stone house extending from the back, more white clapboard, newer and higher on the other side. It was like a handful of giant houses all smashed together with no regard for aesthetics or conformity. It was equal parts horrifying and mesmerizing.

The house is symbolic of the labyrinthine Roanoke secrets.

Her cousin Allegra is alternately  moody and loving, and Lane is never quite sure which version she’s going to get. Her grandmother is mostly distant. Her grandfather “was fiercely handsome. …If charisma was power, my grandfather was king.”

The Roanoke family has a long history of loss. Yates’s two sisters are gone, so are his daughters. Until Lane returns to Kansas, Allegra has been the only Roanoke girl. It is a special designation, Lane comes to discover.

The novel toggles back and forth between ‘Then’ (Lane’s fifteenth summer) and ‘Now’, which happens eleven years later when Lane gets the call that Allegra is missing. Yates begs Lane to return to Roanoke. Despite her reservations, the pull of family is strong and Lane finds herself back in Kansas. Her return puts her back in contact with Tommy, Allegra’s on again – off again teenage boyfriend, now a cop, and Cooper, “still the most beautiful person” Lane has ever seen. It’s a toxic mix and makes for absolutely riveting reading.

What happened to Allegra? What happened to all the Roanoke girls? That’s the central mystery in the book. Actually, you’ll learn  the what pretty early on and it’s an explosive family secret.

This book had all the things I loved: great writing, a compelling main character who is damaged, but fierce and smart, a never-ending air of menace and unease, a hot, broken guy and a lot of twists.