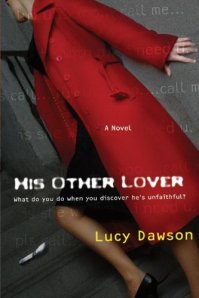 I seem to be on an infidelity kick lately. I read Lucy Dawson’s debut novel, His Other Lover, over two nights, reading until my eyes burned. In all the ways Love and Other Natural Disasters failed, His Other Lover succeeded.

One night, Mia, a 20-something woman who works for a small advertising firm somewhere near London, discovers a text message on her live-in boyfriend’s phone. Mia thought Pete was the one. Turns out he’s someone else’s one, too. That someone else is an actress named Liz.

The discovery of the text message begins a downward spiral of destructive behviour which upends Mia’s life. But hers is not the only life shattered by the discovery.

It’s interesting, but true, I think: women who are cheated on often blame the other woman. Mia pours all her anger and hatred on top of Liz. She almost makes Pete seem like another victim, someone who fell into Liz’s Black Widow trap and was helpless against her sticky charms.

Of course it’s all much more complicated that that. Mia goes completely off the rails, calling in sick for days on end while she tries to track down Liz. She wants her boyfriend back and the only way to do that is annihilate the enemy.

Dawson does a terrific job of getting inside of Mia’s head. The whole range of emotions are there: grief, anger, the hot desire for revenge. Mia is single-minded in her thirst for getting back her man. The thing is: he’s not worth it.

But the book is.

When Eve, a young mother pregnant with her second child, overhears her husband having what sounds like a very intimate conversation on the phone in the middle of Thanksgiving dinner, her whole neatly ordered world is turned upside down. She overhears her husband say: “Shh, you’re going to be okay” and that’s all it takes to know that something is going on.

Holly Shumas’ novel Love and Other Natural Disasters explores the effects of an affair – not a physical affair, but an  emotional one – on a marriage. I suspect that there are probably some people who would say that if there isn’t any sex, it’s a “no harm, no foul” situation. Shumas does a pretty good job, though, of illustrating that looking outside of your marriage for any sort of fulfillment can have devastating consequences.

Love and Other Natural Disasters traces Eve and Jonathan as they try to put their marriage back together. It’s a push/pull affair as they both try to cope with their own issues and the unresolved issues in their marriage.

Shumas herself is a licensed marriage and family therapist and if I have any niggles with the book it’s that sometimes it seems instructional. The characters each have a part to play to demonstrate the various stages of grief: the disbelief and anger, forgiveness and acceptance. Sometimes their reactions seemed over-the-top or not quite harsh enough. For example, after she discoveres her husband’s relationship, she reads his emails looking to understand what’s gone wrong. Later, in therapy, Jon blows up about her invasion of his privacy. Um, hello, there wouldn’t have been any need for her to go snooping if you hadn’t done something inappropriate. But I know the therapist’s point of view might be to suggest that Jonathan has a right to his anger.