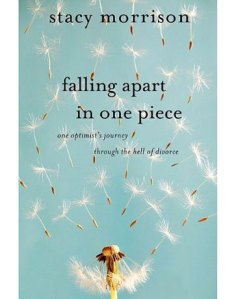 Most of my friends will tell you that I am not really a self-help kinda gal. I read for pleasure – thus the name of this blog. I have to do a fair amount of reading-to-learn for my job, so my personal reading tends to lean towards the “lost-in-a-book” category. A nice balance of fluff and more challenging fare.

That said, there are so many memoirs out there which actually fall into the category of reading I like to do. Stacy Morrison’s book Falling Apart in One Piece ticked a whole bunch of  boxes for me: well-written, engaging, takes place in NYC, heroine who was relatable and, okay, yes, it just happened to be about the deterioration of a marriage…a subject that has been much on my mind these last few months.

Morrison was, for many years, a well-regarded magazine editor (Marie Claire, Modern Bride, Redbook) in New York City. An over-achiever, her career is hitting new heights just as her thirteen year relationship (ten of them married) to Chris starts to skid. The night he announces that their marriage is over is a shock to Morrison, although she is certainly able to trace its demise once she sets herself to the task.

Falling Apart in One Piece doesn’t gloss over any of the details. The stages of grief are all there in full view: shock and denial, pain and guilt, anger and bargaining, depression and loneliness and finally, hope.  Morrison is also quick to share the blame for what went wrong; she’s done the hard work and scratched beneath the surface of her own shortcomings as a partner.

Falling Apart in One Piece isn’t a finger-pointing memoir. (In fact, the book is dedicated to Morrison’s son and Chris.) Morrison honestly tries to work through what went wrong, but it takes months of soul-searching to finally get to a place of hope. The beauty of her memoir is that she doesn’t ever make it feel like all it takes is the snap of a finger or a new man to fix what has gone horribly wrong. Her heartbreak is palpable:

Somehow I came back downstairs to finish a conversation I’d never wanted to start, a conversation I had never even had the foresight to dread. I sat on the sofa next to Chris, not touching him and barely even looking at him because I was so afraid, and I cried. He talked, and I talked. I reasoned and begged and pleaded and sobbed and wailed. I tried to manipulate. I tried to convince him I would die That Very Second if he didn’t realize the total wrongness of his thoughts. I didn’t yet understand that these tactics would no longer work, that I was already out of the equation.

Morrison is left with no choice but to pick up the shattered pieces of her life and move on: she has a baby, a new job, a house in need of many repairs and suddenly, she is all alone. Her memoir is full of moments of humour, insight, sadness and, ultimately, hope.

Anyone who has been set on this path  – whether or not they have chosen it themselves or had it chosen for them – will benefit from Morrison’s reflections. The end of a marriage is heart-wrenching, but as Morrison’s favourite poet, Rainer  Maria Rilke says: “The point is to live everything.”

Saskatchewan native Holly Luhning  has written a compelling novel based on the shocking life of the Hungarian Countess, Elizabeth Bathory.  Bathory, who was born in 1560, earned her shocking reputation for having tortured and killed over 600 young girls so that she might bathe in their blood and thus retain her youthful beauty.

Luhning’s novel, Quiver, is a creepy crawly book that follows Danica, a young foresnic psychologist, who has moved to London with her artist boyfriend, Henry, to work at Stowmoor, a Victorian hospital for the criminally insane. Danica’s patient is Martin Foster, a young man incarcerated for murdering a young girl as a tribute to Bathory.

Danica’s fascination with Bathory grows when a woman from her past, the  beautiful and duplicitous Maria, comes back into her life. Maria, it seems, has discovered Bathory’s private diaries and as she translates them and begins sending the horrific snippets to Danica, Danica’s life starts to shift.

We’re all, to some degree at least, train-wreck fascinated by the heart of darkness.  Danica’s morbid curiousity about Bathory (and the translated diary entries are not for the weak-stomached, believe me!) is complicated by her attraction/repulsion to Maria. Maria is impossibly beautiful and crazy-cool. I didn’t trust her at all, but I could see Danica’s attraction. There was something sinister about her and always an undercurrent of sexual attraction, too.

Quiver races along like the best thrillers, but it also has something compelling to say about art and that 15 minutes of fame so many of us seem to desperately crave. 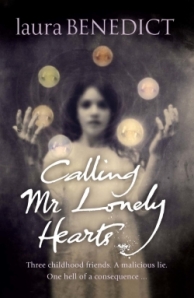 I’ve tried to write a review for Calling Mr Lonely Hearts several times but every time I try to say what this book is about I get stuck. It could be summer brain; my mind just isn’t firing on all cylinders or it could be that I really don’t know what to say about Benedict’s book.

We first meet Roxanne, Del and Alice in the park. Roxanne is casting a spell or conjuring a spirit. It’s really nothing more than a childhood prank, but it has serious repercussions for the three friends. We don’t get too much more information about the girls at this stage except for the fact that Roxanne, clearly the daredevil, seduces Father Romero, a new young teacher at their parochial school.

Fast forward to the girls as adults: Roxanne is an unmarried artist of some note, Del is happily married to Jock  and stepmother to Wendy and Alice is married to Thad, a dentist on the cusp of leaving her. The past is just about to bite them all in the ass.

Here’s where I get stuck. Is this book a supernatural thriller, a revenge fantasy gone awry, a titillating sex romp? I dunno. There are elements of all these things many of the wrapped up in the character, Varick, a mysterious and dangerous man who visits the lives of all the women.

The book clicks along at a reasonable pace and the characters are interesting, but the elements of supernatural means they have no free will and so, ultimately, they’re just fish on a hook.

See, I really don’t know what to say about this book. ::sigh::