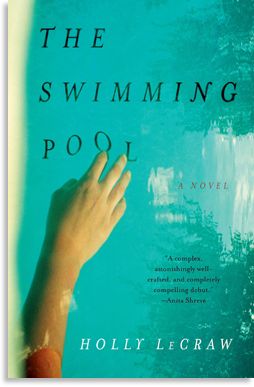 Holly LeCraw’s novel The Swimming Pool was well-reviewed when it was published in 2010 and so my lackluster feelings about the book make me feel like I must have missed something. I kept thinking it was ultimately bound for my Book Graveyard but I kept at, mostly because LeCraw’s writing was quite lovely even though the characters were mostly irritating.

Marcella Atkinson and her husband, Anthony, and daughter, Toni, spend a summer at Cape Cod. There, they meet the McClatcheys, Cecil and Betsy and their children, Jed and Callie. Marcella is an exotic Italian goddess, somehow separate from all the other women on the Cape and Cecil is drawn to her.

Flash forward a handful of years: Cecil and Betsy are dead and adult Jed finds an old bathing suit in the family home. He knows it belongs to Marcella, so he tracks her down. He’s at loose ends – he’s taken a leave of absence from his job as a lawyer to spend time with his sister, Callie, who has just given birth to her second child and is clearly super-depressed. Everyone in this book is depressed – maybe that’s why it seemed like such a slog. Geesh, people, you’re on the Cape, you clearly have pots of money for which you don’t have to work, some of you are having sex…on the floor…lighten up already!

Marcella welcomes Jed into her world like she’s been waiting for him all her life. After their first night together (nothing happened, btw) he watches her in the kitchen.

She was barefoot. Her feet on the wooden floor were narrow, with a high, delicate arch. Her legs were slender – he’d noticed that already, but in this morning light they were not like a young girl’s legs – the skin was different, looser, not taut and smooth. He didn’t care.

It’s hard to say whether Marcella’s feelings for Jed blossom out of all those babies she lost or the fact that he’s the son of the man she had an affair with, but before you can say strudel, those two are at it like rabbits.

All the people in The Swimming Pool have angst to spare and perhaps that’s one of the main reasons I found the book so slow. Where’s the narrative center? Is this a story about Callie and her post-partum depression? Is it the story of Marcella’s estranged relationship with her daughter? Is it a love story? Is this a story about the power of secrets to destroy families? There’s all this and more crammed into the book, but at the end of the day, the pretty writing doesn’t make up for the listless plot.

Half-siblings Hunter and Ashlin have been friends with Chance since they were kids and first started to spend summers in Maine with their father. Chance is the glue that bonds the three together, despite the fact that Hunter and his sister don’t really know all that much about him.

I knew all the things about Chance that mattered most. Chance was strangeness and whimsy in human form.

Chance was our summer.

We didn’t see him or talk to him through the winter, but when we arrived for summer vacation, the three of us came together like we’d never been apart.

This year things are different, though. Hunter and Ashlin have decided to take a gap year and spend it with their father, who is still recovering from a workplace accident (he’s a cop and was shot; Hunter and his sister were kept with their mothers and away from their dad for a couple years).

So, now they’re back in Maine with their dad and each other…and with no way to contact Chance. When they finally do track him down,  they discover that Chance hasn’t been 100% honest with them.  For one thing, his house “is nothing like what Chance described.”  His parents are clearly not glamorous jetsetters, either. Instead, his mother looks “like she cuts [her own hair], and her face is gaunt and tired. She’s wearing a gray men’s bathrobe over a nightgown and pink slippers that have seen better days.” Chance’s father is “broad-shouldered and stone-faced, with a jaw that hasn’t seen a razor in a few days.”

But Chance is the same. And not the same.

Kelley York’s YA novel Made of Stars captures that time between innocence and experience. These three teens have a shared history made more complicated by an unexpected love triangle. But Made of Stars isn’t a straight-up love story.  When someone turns up dead, Chance is implicated and Hunter and Ashlin set out to prove his innocence. Turns out, even that is more complicated and dangerous than the siblings could have imagined.