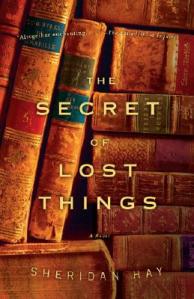 The Secret of Lost Things is a quiet book inhabited by a cast of eccentric characters who all work in a labyrinthine book store in New York City.

If I start with my own beginning you will understand how I came to the Arcade, and how it came to mean so much to me.

18-year-old Rosemary Savage leaves her homeland of Tasmania after the death if her mother. Rosemary really only knows two things: the hat business (her mother was a milliner) and books (her mother’s only friend , Chaps, owned a bookstore.) Upon her arrival in New York, Rosemary stumbles across the Arcade and lands a job.

The Arcade reminded me immediately of The Strand. Any book lover who’s spent time in NYC has likely visited The Strand. It’s a sprawling, book-crammed paradise for bibliophiles. 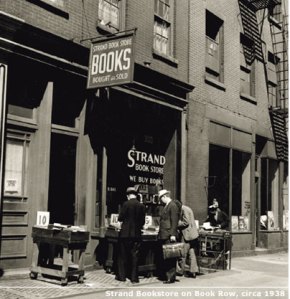 As it turns out, Sheridan Hay actually worked at The Strand for nine months, so the similarities I saw in her fictionalized  bookstore were no doubt based on her real-life experiences at The Strand.

Rosemary’s colleagues are a strange crew. There’s Pearl, the man transitioning to become a woman. There’s Oscar, the beautiful gay man in charge of the Non-Fiction section. And there’s Walter Geist, the bookstore’s manager who is an albino.

Although the blurb on the back of The Secret of Lost Things makes it sound like a literary thriller, that’s not what the book is really about.  The characters who work at the Arcade are bookish types, more comfortable with the dusty tomes they sell than with each other. Each of them guards their little book store nook like jealous lovers. Rosemary’s arrival awakens all sorts of feelings and pettiness and passions. Rosemary develops a crush on Oscar even though he’s clearly not interested in her. (In fact, he’s downright mean.) But it’s Geist whose life is forever changed by Rosemary’s arrival. In retrospect she remarks:

Walter Geist’s blindness is important, but it’s my own with regard to him, that remains a lasting regret.

The Secret of Lost Things is a coming of age story. It’s a story about loss and grief. And it’s a story about the transformative power of literature. While there is a literary mystery at the book’s core, it’s not nearly as interesting as the mysteries of the heart.