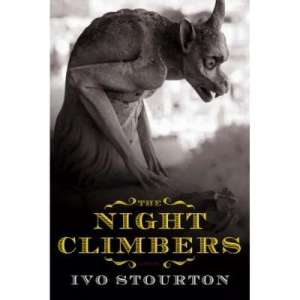 A couple weeks ago I mentioned Donna Tartt’s novel The Secret History, a book I read almost 20 years ago. If you haven’t already read it, I can highly recommend it as a compelling novel about art and literature, particularly from the Greek period. But even if this isn’t your thing, The Secret History tells an intriguing tale of friendships made and destroyed on a college campus. It’s a book that has stayed with me all these years and one I should really re-read.

Ivo Stourton’s novel The Night Climbers mirrors Tartt’s novel in some respects. When James Walker arrives at Tudor College, Cambridge, he is careful about the friendships he forms.

My father and Evelyn Waugh had warned me against the dangers of making early friends, so I deliberately avoided contact with my fellow freshers in my first weeks, hoping to cultivate a vague air of mystery that would bring me to the notice of the social elite.

Pure chance brings Michael Findlay into his room and then, shortly thereafter,  into a secret circle known as The Night Climbers.  James is smitten with The Night Climbers, particularly Francis, the son of a Lord.  Francis is beautiful and irreverent, blithely spending his substantial allowance on alcohol, drugs and dinners out. Soon James is a part of this group and the novel follows their escapades from their delirious (both literally and figuratively) highs to their rock-bottom lows.

Stourton’s novel is well written. The story begins some years after James has left university and is paid a visit by one of his former friends who hints at some trouble that might be coming their way. The story then artfully backtracks, introducing us to this interesting group of characters. James is not altogether unsympathetic, either, which is helpful because despite Stourton’s skill, the book lacked any emotional resonance for me.

AT HOME: Where All the Light Tends to Go – David Joy