Jamie and Mia are best friends who live in a really small town with a stupid name. Jamie is bisexual, but Mia doesn’t know – so they’re apparently not best best friends. Oh, but wait, Mia is having trouble with her smokin’ red hot boyfriend, Aiden, so Jamie suggests a weekend of swapping. Luckily, Jamie’s boyfriend, Caleb (equally smokin’ hot) is all for it – he even knows Jamie wants to make it with Mia.

What follows is a bunch of reasonably well-written sex scenes, strung together with what passes off as insight into what motivates these characters to swap bodily fluids. It’s smut, people. 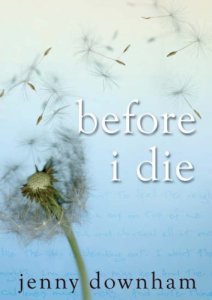 Sixteen year old, Tessa, is dying.  She’s been sick with leukemia since she was 12, but there’s nothing more they can do for her. When Jenny Downham’s moving novel Before I Die  opens, Tessa has decided to make a list of all the things she wants to do before she leaves the earth. Right off the top, she wants to have sex.

Tessa is a believable character, sullen and bitchy one minute and hopeful and loving the next. She lives with her dad and younger brother, Cal. Her mother left the family to follow another man to Scotland. The relationship didn’t work out and she’s in the neighbourhood, but Tessa’s care is really left to her father, who has given up work to stay homelook after Tessa.

Before I Die is a book about living the best way you can with the time you have. There’s a lesson in there for all of us. When Tessa meets Adam, the boy next door, her world starts to expand. When her best friend, Zoey, finds herself pregnant, Tessa has something to look forward to. Ultimately, though, this is a novel about dying and the last twenty pages or so are amoung the most moving I have ever read.

Intrator, a professor at Smith College, spends a whole year observing high school teacher, Mr. Quinn, in his classroom in a high school on the West Coast. His observations about the classroom are captured in his book, Tuned In and Fired Up. Obviously, this isn’t the sort of book that will interest the casual reader, but as a high school English teacher, I found it illuminating, inspiring and practical.

Anne Morrow Lindbergh’s meditation on “youth and age; love and marriage; peace, solitude and contentment” is slightly old-fashioned. It was, after all, published 50 years ago.  Lindbergh spends time at the beach, reflecting on her life, and writing in a journal – perhaps never having intended to share her thoughts with the world. Still, she invites the reader to consider how to attain balance in ones own life and that is certainly a modern question.

Not quite as frothy as you might think, Tess Stimson’s novel The Adultery Club tells the story of a  happily married couple, Nicholas and Mal, whose lives and marriage are torn apart when Nicholas decides to have an affair. The novel is told from various points of view and was certainly an entertaining read. 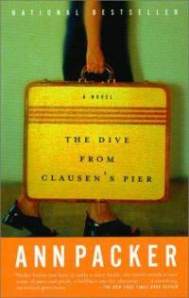 Twenty-three year old Carrie Bell has spent her whole life in the same small Wisconsin town. She’s engaged to her high school sweetheart, Mike, and it seems like her future is set. Except she’s not happy. She wants more.  The  Dive from Clausen’s Pier ﻿is a great book, well-written, thoughtful and would make an excellent choice for book clubs.

Ron is a creepy vacuum repair man who falls in love with nine-year-old Rachel. He builds her a fairy tale bedroom in the basement of his shop and then, one hot summer night, he kidnaps her. Helpless is a riveting novel from start to finish. And it isn’t compelling just because of the situation, Ron is one of the most complex characters I’ve read in recent memory and Gowdy is a masterful story teller.

AT HOME: Near the Bone – Christina Henry

33. Empire of the Vampire – Jay Kristoff