Emily Giffin is really popular, I guess, but I’d never read her. I’m a huge consumer of chick flicks, but not much of a reader of chick lit. I tend to like my fiction a little grittier and heroines in these sorts of books almost always settle – at least in my view.

Not even a full year after she’s married upstanding and handsome lawyer, Andy, (who also happens to be the older brother of her best friend, Margot), Ellen runs into Leo crossing a busy Manhattan street. Leo is “the one who got away” although in this instance, it’s more like the one who fizzled away. Ellen is sent into a tailspin of memories and she indulges every one of them, glossing over how Leo was kind of a schmuck at the end of their relationship.

Okay – so far I’m with you Ellen. I mean, seriously, who hasn’t had the same sort of intense relationship – the one where you’re up all night…um…talking? But Ellen has moved on from all that. Now she’s a successful photographer and Andy, he’s a great guy. She hasn’t settled. At least she doesn’t think she’s settled until Leo comes crashing back into her life.

And that’s when my cell phone rang and I heard his voice. A voice I hadn’t hears in eight years and sixteen days.

“Was that really you? he asked me. His voice was even deeper than I remembered, but otherwise it was like stepping back in time. Like finishing a conversation only hours old.

Oh, Ellen. Don’t go down that road. But we all do. We all wonder about the might have beens and question the choices we make. Ellen’s marital bliss is about to get bumpy as she hides her reunion from her husband and best friend, and then makes all sorts of minor adjustments to the truth so she can sort through her feelings for Leo.

The truth, it turns out, is more complicated than it appears on the surface. And so is the first year of any marriage. When Ellen and Andy move to Atlanta to be closer to Andy’s family, sister Margot included, Ellen is further tested.

I’ll give Giffin props; Love the One You’re With isn’t sheer fluff because Ellen is a character who is deeply conflicted about her feelings even though she never doubts her love for her husband and the life they’re building together. The new improved Leo is worth a second look, but Ellen is also mature enough to know what the consequences of taking that leap of faith might be.

Tabor has been a journalist, teacher, and business woman. She decided to add blogger to the list after her husband of 20 plus years announced that he wanted to live alone. Tabor rights her upside-down world by blogging about it. Having felt this blogging impulse myself and being closer to her age (60) than I am to my daughter’s age (14), I figured (Re)Making Love would be a worthy and interesting examination of singledom after a long relationship. Especially when the break comes at a certain point in a woman’s life. After all, who is going to consider dating again at 60!? Okay, or 50!?

Tabor’s blog turned memoir recounts the heartbroken days immediately following her husband’s departure. It spills the beans on property division, using your children as  a pseudo psychiatrist’s couch, online dating,   post-marital sex. With another man!  (Clearly though this was a possibility for Tabor; she’s incredibly attractive and doesn’t look  – from the jacket photo at least – a day over 40, even with her silver-gray hair.)

So I sat down with (Re)Making Love one Sunday afternoon – prepared to go on Tabor’s journey a la Eat, Pray, Love (which, yeah, okay, I didn’t like either – but at least I could follow it). Sadly, the book just didn’t do it for me. And I really, really, wanted to like it. I mean, I am sorta where Tabor was. I’m not quite as old; I’m not quite as well-off; my kids aren’t self-sufficient but I am looking ahead at a long, empty stretch of road which was once as crowded with traffic (hopes, companionship, sex, etc) as Tabor’s. I wanted to read the book and feel as though a kindred spirit was guiding me through the potholes.

In many places the book was strangely abstract, convoluted and difficult to understand, peppered with dreams that are meaningless to the reader because they have no context. It is peppered with references to chick flicks, fairy tales, recipes, the Obamas. It is meant to be Tabor’s journey of self-discovery, but despite her dalliances with post-marital romance and despite her son’s admonishment that she “move on. It’s time. It’s way over time” Tabor ends up with the very man who wanted to be alone. Okay, that may be her fairy tale ending, but it’s hard to buy into her happiness when D (as she calls him) is so much a non-entity. Why exactly did she want him back?

I understand that memoirs are someone’s personal story, but there has to be a reason for sharing it with the world. Despite the copious praise on the book’s jacket, I just ever settled in to Tabor’s grief or her journey. What makes her story worthy of sharing? I don’t know.

It’s the dream isn’t it? Well, it’s my dream, anyway. Although I do have a job that I really love…I have always wanted to own my own book store. I did work, for a few  months, at Indigo…and I can’t say that I loved it. Too corporate.  My book store would be small, intimate, friendly – a pot of tea always on the go. There’s something appealing about spending the day surrounded by books, talking avidly to the book-lovers who visit. There’s no money in it, though. But I can dream.

Abe Books posted this story about a used book seller in Victoria, BC. So jealous.

A Day in the Life 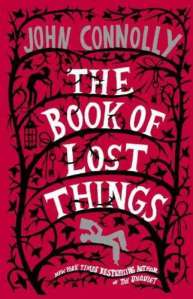 Once upon a time – for that is  how all stories should begin – there was a boy who lost his mother.

Thus begins John Connolly’s amazing story The Book of Lost Things. When I finally turned the last page of this book this morning, I felt that keen sense of satisfaction one feels when they have read an amazing book, a book you know you are going to recommend to everyone. I loved every minute of it.

David is just twelve when his mother dies. An only child, David is devoted to his mother and does everything in his power to keep her alive.

He prayed. He tried to be good, so that she would not be punished for his mistakes….He created a routine, and he tried to keep to that routine because he believed in part that his motger’s fate was linked to the actions he performed.

David is not able to save his mother however; she dies. Soon after, his father remarries and he and his new wife, Rose,  have another son, Georgie. David, still heart-broken over the loss of his mother, resents his father’s wife and his new brother.

I am making the book sound much simpler than it actually is. The Book of Lost Things is a coming-of-age-tale and a hero’s journey, a quest for truth and a horror story all rolled into one. Fairy tales, many familiar, are upended, revealing their slimey and rotten underbellies. David’s youth is slowly taken from him as he must fight, both alone and with companions, for his survival.

David begins his journey as a scared and self-involved adolescent, but as he makes his way towards the castle where the old king apparently has a ‘book of lost things’ which may have the answer to how David can get home, he matures and comes to understand certain truths. It’s an exciting  story; funny in places, creepy in others.

And like Dorothy’s journey to Oz, David soon comes to understand the value of what he has left behind. At journey’s end, he is  a changed person. I was profoundly moved by the book’s final pages.