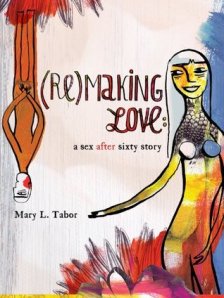 Tabor has been a journalist, teacher, and business woman. She decided to add blogger to the list after her husband of 20 plus years announced that he wanted to live alone. Tabor rights her upside-down world by blogging about it. Having felt this blogging impulse myself and being closer to her age (60) than I am to my daughter’s age (14), I figured (Re)Making Love would be a worthy and interesting examination of singledom after a long relationship. Especially when the break comes at a certain point in a woman’s life. After all, who is going to consider dating again at 60!? Okay, or 50!?

Tabor’s blog turned memoir recounts the heartbroken days immediately following her husband’s departure. It spills the beans on property division, using your children as  a pseudo psychiatrist’s couch, online dating,   post-marital sex. With another man!  (Clearly though this was a possibility for Tabor; she’s incredibly attractive and doesn’t look  – from the jacket photo at least – a day over 40, even with her silver-gray hair.)

So I sat down with (Re)Making Love one Sunday afternoon – prepared to go on Tabor’s journey a la Eat, Pray, Love (which, yeah, okay, I didn’t like either – but at least I could follow it). Sadly, the book just didn’t do it for me. And I really, really, wanted to like it. I mean, I am sorta where Tabor was. I’m not quite as old; I’m not quite as well-off; my kids aren’t self-sufficient but I am looking ahead at a long, empty stretch of road which was once as crowded with traffic (hopes, companionship, sex, etc) as Tabor’s. I wanted to read the book and feel as though a kindred spirit was guiding me through the potholes.

In many places the book was strangely abstract, convoluted and difficult to understand, peppered with dreams that are meaningless to the reader because they have no context. It is peppered with references to chick flicks, fairy tales, recipes, the Obamas. It is meant to be Tabor’s journey of self-discovery, but despite her dalliances with post-marital romance and despite her son’s admonishment that she “move on. It’s time. It’s way over time” Tabor ends up with the very man who wanted to be alone. Okay, that may be her fairy tale ending, but it’s hard to buy into her happiness when D (as she calls him) is so much a non-entity. Why exactly did she want him back?

I understand that memoirs are someone’s personal story, but there has to be a reason for sharing it with the world. Despite the copious praise on the book’s jacket, I just ever settled in to Tabor’s grief or her journey. What makes her story worthy of sharing? I don’t know.