Peter Straub, a writer I have admired for several decades said that Norman Partridge  is “probably the most exciting and original voice in horror literature to have appeared in the last decade.”  Coming from the man who wrote Floating Dragon and Ghost Story, two books I read with the lights totally on, this is high praise.

An unnamed Midwestern town is cursed. Every Halloween the October Boy (or Ol’ Hacksaw Face or Sawtooth Jack) rises from the cornfields and heads to town where all the eligible teenage boys try to kill him. They’ve been denied food for the past few days and the October Boy has a gut full of candy.  This year, Pete McCormick is one of those boys. He’s had a rough few months: his mother has died of cancer, his father’s grief led him to the bottle and that led to the unemployment line. Killing the October Boy is Pete’s way out of town because that’s what the prize is: a way out of the one-horse town he lives in and free everything for his dad and little sister.

What Pete doesn’t know is that the October Boy is on a quest, too. He has to make it to the church by midnight and so he’s every bit as determined as Pete. Neither of them know the town’s dark history or its secrets, though.

I liked Dark Harvest. Was it the scariest book I’ve ever read? Uh, no. It was unusual, though. Creative. And strangely, I sort of felt myself rooting (no pun intended – but you’ll have to read the book to know what I mean) for both Pete and the October Boy. It’s a short book, you could read it in a couple hours if you were so inclined. Save it for Halloween night.

Favorite book from your childhood

I feel as though I’ve talked about  favourite books from my childhood several times already: The Bobbsey Twins, Jane Eyre, A Little Princess, A Tree Grows in Brooklyn. (I might at Trixie Beldon and books by Enid Blyton here.) I can’t really remember a time in my life when I wasn’t reading. Getting the Scholastic order forms at school was a happy time for me (still is, truth be told). Receiving books as gifts, equally wonderful.

Just to shake things up I am going to mention the book Miss Happiness and Miss Flower by Rumer Godden. 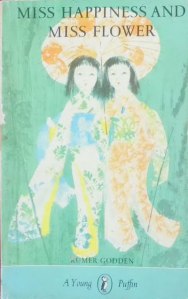 My book has the exact cover seen to the right, but my book has seen better days. I don’t remember who gave me the book, but I adored it. It’s the story of  a little girl called Nona who leaves India to live with her aunt and cousins in chilly England. Nona isn’t happy, and then someone sends her two Japanese dolls that Nona feels are as displaced as she is. Published in 1961, this book survived many, many moves and now sits on my daughter’s bookshelf. She loves it as much as I do.