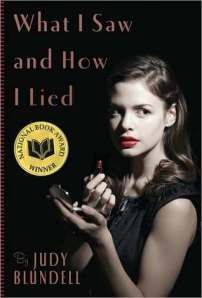 Judy Blundell’s YA novel What I Saw and How I Lied won the National Book Award and was named a best book by both the School Library Journal and the ALA (American Library Association). The accolades are well-deserved. This novel offers a glimpse into another time and another world and makes a nice change from reading all the dystopian and fantasy novels crowding the shelves these days.

Fifteen-year-old Evie lives with her beautiful mother, Bev, and her step-father Joe, a  veteran of World War 2,  and Joe’s mother Grandma Glad in Queens, New York. It is 1947. Things have been different since Joe returned from the war. Evie remembers a man who “made walking look like dancing…had a special greeting for everyone on the block.”  The post war Joe was different.

It was the war. You couldn’t ask him about it. You didn’t want to remind him. What every wife and daughter could give was a happy home. That was our job.

One night, out of the blue, Joe announces that he is taking Bev and Evie on vacation to Palm Beach, Florida. he makes the holiday sound so glamorous, but when they arrive it is to discover that Palm Beach is practically a ghost town, “the rest of the hotels didn’t even open until December. All of the stores on Worth Avenue, Palm Beach’s main drag, were closed. The Paramount Theatre was closed.”

…I saw him under the moon. My breath stopped. He was not just handsome, he was movie-star handsome. Dark blond hair, a straight nose. A hunk of heaven…

Peter turns Evie`s world upside down and creates a strange friction between her parents that she does not  quite understand. Not that she cares too much. Peter is older and more sophisticated and despite his mixed signals, Evie begins to take those first tentative steps towards adulthood.

As a coming-of-age story, What I Saw and How I Lied works quite well. It is definitely evocative of  another time and place. Once she realizes what is waiting for her on the other side of childhood, Evie is desperate to grow up. But there is a price to pay. This would be a great book for careful readers. It`s not action-packed, but it is well-written and thoughtful. When Evie and her parents finally return from their holiday, Evie`s life has been  altered. The line between innocence and experience has been crossed and for Evie at least, a terrible price has been paid.