The Fate of Katherine Carr is the story of things lost and found. George Gates is a former travel writer who now writes features for the local paper and spends his evenings drinking scotch at his neighbourhood bar. He’s a broken man, but no wonder: his eight year old son, Teddy, had been taken off the street on his way home from school, murdered and the murderer had never been caught. That was seven years ago, but George hasn’t recovered. He was supposed to pick Teddy up at the bus stop and hadn’t because he’d been trying to write the perfect sentence. He’s consumed with guilt.

One night at the bar, George runs into Arlo McBride, a retired police detective. Over drinks, Arlo tells George about the one missing person’s story which has stayed with him because it was never solved.  She vanished, Arlo tells George,  “like she cut a slit in the world and stepped through it into another one.”

George is intrigued. Before he’d retired from travel writing, he’d spent the bulk of his career writing about places where people had disappeared. Creepy places like Saipan, where Japanese parents – fearing American soldiers – had hurled their children and then themselves from the cliffs. He suddenly finds himself investigating what might have happened to Katherine. As it turns out, Katherine was also a writer and she left behind a handful of poems and a story which Arlo provides to George.

During the course of his ‘investigation’ George meets Alice Barrows, a twelve-year-old with progeria, a disease which causes premature aging. At first, Alice is just a potential subject for a story, but their relationship quickly becomes more profound. Alice is alone in the world and so is George. She is interested in mysteries and George is soon sharing  Katherine’s story with Alice.

Thomas H. Cook is one of my favourite writers. I’ve said it before and I’ll say it again – he writes literary mysteries. They’re page-turners, to be sure, but they are beautifully written, too. The characters are complicated and, more often than not, damaged. George is particularly sympathetic. As a parent, I can only imagine how horrific it must be to lose a child to a monster, but to live daily with the guilt of not being where you said you would. Cook ups the ante every single time.

The Fate of Katherine Carr works on many levels. Narratively, it’s a story within a story within a story. Emotionally, it’s hard not to be moved by George’s never-ending grief or Alice’s own sad fate. Some might argue that nothing much happens, but I respectfully disagree. While Cook might not write blood and guts thrillers, and while his endings might not leave all the loose ends tied in a neat bow – I think he writes fantastic books for careful and thoughtful readers. 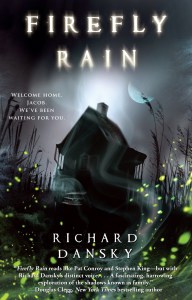 Not to be confused with Firefly Lane, Richard Dansky’s debut novel Firefly Rain is about the prodigal son coming back to his childhood home in some back woods town in North Carolina – although he just calls it ‘Carolina.’ His business in Boston has failed, his parents are dead, but the old homestead is just waiting for him.

So, yeah, Jacob Logan goes home to Maryfield. His childhood isn’t quite as he remembered it. For one thing, the fireflies he used to catch on his property now don’t seem to want to come onto Logan land – they stop just at the border of his property and if they cross onto it, they die. For another, his house is creepy – doors open and bang shut; toy soldiers turn up where they shouldn’t be. Carl, the old guy who Jacob has been paying to look after the property after his parents died, is weirdly antagonistic. Then someone steals his car.

Firefly Rain is supposed to be scary. In fact, Publishers Weekly called it “Disturbing…remarkable” and Library Journal called it “Classic horror…a tightly paced tale of mystery and terror.”

I call it hokum.

Nothing was scary about this book. At all. Except perhaps the way the characters spoke.

“I need someone down here whom I can trust,” Jacob says to his friend Jenna. “I’m spooked Jenna, spooked bad, and I need someone who can watch my back until I can get my head screwed on straight.”

Then there’s the scene where Jacob chases his stolen car up and down a dirt road until he finally collapses in the ditch. In his slippers. In the rain.

And then there’s the convoluted denouement – where all the men of Maryfield show up on the property because of some wacky promise they made to Jacob’s mother.  I didn’t really get it…but by then, I didn’t really care.

“What if we had the chance to do it again and again, until we finally did get it right? Wouldn’t that be wonderful,” says Teddy to his big sister, Ursula, the unusual main character of Kate Atkinson’s even more unusual novel Life After Life.

Ursula is born  in February, 1910. She dies and is born again. And again. Attempting to piece these multiple lives into any sort of coherent order is damn near impossible so I suggest you don’t even try. It’s far easier to just be with Ursula as she is born, grows up and then grows up again, each time encountering different possibilities based on life’s many variables. The reader is dropped into Ursula’s life at different points, just as she seems to be. Ursula hits the ground running, and eventually – with a little bit of attention paid –  so does the reader.

Ursula is a fine character with which to spend your time. She was “born with winter already in her bones” and when winter comes around again she “recognized it from the first time around.” It is through her eyes we see her parents: her perfect and beloved father, Hugh and her slightly snippy mother, Sylvie. When she is born she already has two older siblings, Maurice and Pamela, and then her arrival is followed by Teddy and James. The siblings and their parents live at Fox Corner, an English estate. Her lives and deaths flow almost seamlessly together, darkness falls and she is no more until she is again – still with the same family, still Ursula.

I don’t pretend to understand the novel’s finer points (it would take at least another reading), but I can say this: Life After Life clocks in at almost 500 pages and it was a joy to read. Sometimes Ursula makes choices which are ultimately detrimental to her well-being. One bad decision tips the balance and causes her life to spin out of control.  It’s only human to wonder how things might have been different if only… Other times her life is better, but not perfect. People suffer and die. World War I and then II upset the status quo.

There is a part of Ursula’s conscious that recognizes that her life seems to be on repeat. Her mother tells her it’s déjà vu, “a trick of the mind.” Dr. Kellet introduces her to the word “reincarnation” when she is just ten. But explanations are not necessary for Ursula or the reader. And although not every version of her life is a joy to read about, each one is as compelling as the next. Perhaps Ursula knows instinctively that ” If there’s no great glorious end to all this, if nothing we do matters… , then all that matters is what we do. ‘Cause that’s all there is. What we do. Now. Today. ” (Thanks for that quote, Joss Whedon! From the Angel episode “Epiphany.”)

It might be interesting to consider that Atkinson is also playing with the notion of novelist as God. Of course a novelist really does have the opportunity to make anything they want to happen to their characters happen. They don’t however, under normal circumstances, make every scenario happen in the same novel. If this was an experiment for Atkinson, it paid off in spades. The writing is beautiful. Ursula is everything you’d want in a protagonist; the minor characters are compelling and each and every one of Ursula’s lives offers something of value to careful readers.