Thank goodness for Holly Black – she’s put the bite back into vampire fiction. 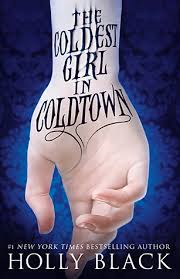 If you’ve been playing the home game, you’ll know that Stephenie Meyer pretty much took fangs and sex out of the vampire equation with her hugely popular Twilight series.  I didn’t hate the first book, but it went downhill fast afterwards. I loved The Coldest Girl in Coldtown. The prose sparkles, but the vampires don’t, so it’s win-win for lovers of vampire fiction.

Tana woke lying in a bathtub.

It doesn’t take very long for Tana and the reader to realize that something just isn’t right. Tana had been attending a sundown party and had locked herself in the bathroom to avoid her ex boyfriend, Aidan. Exiting the bathroom the morning after, Tana is aware of the quiet.

She’d been to plenty [of sundown parties], and the mornings were always full of shouting and showers, boiling coffee and trying to hack together breakfast from a couple of eggs and scraps of toast.

What Tana finds instead, as she moves through the house which smells of spilled beer and “something metallic and charnel-sweet,” are the bodies of her classmates “their bodies pale and cold, their eyes staring like rows of dolls in a shop window.”  And we’re only on page five, people!

The Coldest Girl in Coldtown takes the best parts of standard vampire mythology and ups the ante. The vampires in this book are rock stars, revered and coveted.  Black builds a mythology that is believable. Patient zero in Black’s world is Caspar Morales, a vampire who decided that he wouldn’t kill his victims, he’d infect them instead. Essentially, you’re bitten by a vampire, you’re infected, or Cold.

If one of the people who’d gone Cold drank human blood, the infection mutated. It killed the host and then raised them back up again, Colder than before. Cold through and through, forever and ever.

Pretty soon, the government has no choice but to barricade the infected people (and the wannabes) in places called Coldtowns. People who suspect that they are infected must,  by law, turn themselves in. And once you’re in a Coldtown, there’s no getting out.

As Tana comes to terms with the fact that her friends are dead, she discovers that Aidan is, in fact, not. He’s been bungee corded to a bed and chained beside him is a vampire boy, a boy who “must have been handsome when he was alive and was handsome still, although made monstrous by his pallor and her awareness of what he was.”

This is Gavriel. He is everything a vampire should be: dangerous, cunning, tortured and impossible to resist. (Okay, maybe I am just a little bit fixated on my personal notion of a vampire here, but Gavriel ticks all the vampire ticky boxes for me. )

The Coldest Girl in Coldtown is so good. Tana is smart and resourceful and brave. The book builds a world that is believable and terrifying. It is a world that just is. The book isn’t scary, but it is definitely a page-turner. The descriptions of vampirism are bloody and sensual (without being over-the-top, so there’s nothing sexually graphic).

I raced to the end, concerned for all the characters and their fates.  Should there be a sequel?  Black had this to say on her website:

Coldest Girl in Coldtown was written as a stand-alone. That said, I know what happens next, and maybe someday you will too. Right now, as with Curse Workers, I’m happy with where I left everyone. I’m sure they’ll be fine. Right?

I’m good with that.