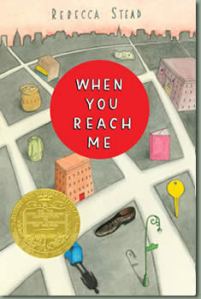 Rebecca Stead’s Newberry Award winning novel, When You Reach Me, is a puzzle of a book. And I should note that the Newberry isn’t the only prize this book received – there’s a list of twenty other prizes and distinctions this book has received. This book has some serious pedigree. It’s a middle grade book, but I’m telling you – those middle grade kids better be on their toes because this book is a puzzle.

Twelve-year-old Miranda lives in a New York City apartment with her legal secretary mom. Sometimes her mom’s boyfriend, Richard, is there. That’s okay because “Richard looks the way I picture guys on sailboats – tall, blonde and very tucked-in, even on weekends.”

Miranda’s best friend, Sal, lives one floor below Miranda. For as long as Miranda can remember it’s been Sal and Miranda, Miranda and Sal. Until it wasn’t.

It happened in the fall, when Sal and I still walked home from school together every single day: one block from West End Avenue to Broadway, one block from Broadway to Amsterdam, past the laughing man on our corner, and then half a block to our lobby door.

Miranda has been receiving mysterious notes, notes that seem to predict the future. The notes seem to know an awful lot about Miranda and her life. And then the spare key to the apartment goes missing. And while all this is happening Miranda has to manage her estranged relationship with Sal and all the other pre-teen drama a twelve-year-old must face.

When You Reach Me is a delightful hybrid. It’s one part coming-of-age novel, one part science fiction, one part homage to Madeline L’Engle’s A Wrinkle in Time and all parts fabulous.