I was unaware of the history which inspired Christina Kline Baker’s novel Orphan Train. According to the notes found at the back of the book “between 1854 and 1929, so-called orphan trains transported more than two hundred thousand orphaned, abandoned, and homeless children – many of whom, like the character in this book, were first-generation Irish Catholic immigrants – from the coastal cities of the eastern United States to the Midwest for “adoption,” which often turned out to be indentured servitude.”

In a nutshell, Orphan Train is the story of one such girl.

But it is also the story of another girl, someone who is also without a home and has spent much of her childhood bouncing between foster homes. The lives of these two people (one just seventeen, the other ninety-one) intersect, but that is actually the least interesting part of this novel.

Niamh Power is a little girl when her parents decide to leave their impoverished lives in Western Ireland and make the arduous journey across the Atlantic to America.

People all around us were fleeing to America: we heard tales of oranges the size of baking potatoes; fields of grain waving under sunny skies; clean, dry timber houses with indoor plumbing and electricity. Jobs as plentiful as the fruit on the trees.

Of course, the reality is something quite different and Niamh finds herself living in a four-room apartment with her parents and three younger siblings. The landlord tells them “I have no trouble with the Irish, as long as you stay out of trouble.”  Still, Niahm is hopeful for a new start because her father “had the promise of a new job. We could pull a chain for light; the twist of a knob brought running water…”

Sadly, Niamh’s hopes for the future soon turn to despair and she finds herself alone and on one of the orphan trains bound for 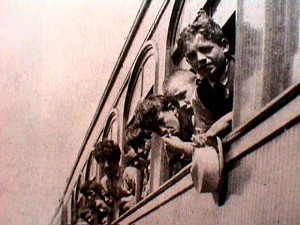 the west. She is only nine when she is taken on a journey to find her a new family.

They call this an orphan train, children, and you are lucky to be on it. You are leaving behind an evil place, full of ignorance, poverty, and vice, for the nobility of country life.

Not so much, really.

Molly is the other character in this book. She works hard at being different in an attempt to push people away, mostly in an effort to protect herself. She had “liked the distance her persona created, the wariness and distrust she saw in the eyes of her peers.” Just lately, though, Molly has found that maintaining her ‘look’ was making her “impatient.”

When she tries to steal a copy of Jane Eyre from the local library, she is assigned community service and it is that sentence which brings her into Niamh’s world. From a prickly beginning, a real bond is formed between the two disparate women – which is both lovely and problematic for the novel.

I read Orphan Train in an afternoon; the pages literally turned themselves. I loved reading Niamh’s story. I knew nothing about these orphan trains and Niamh’s tale was fascinating and heartbreaking. Molly was also likeable. Despite her attempts at pushing people away, she is clearly smart and resilient. C’mon, her favourite book is Jane Eyre! It would be impossible for an avid reader not to like her.

For about two-thirds of the book I was all-in. Then, things started to speed up a little too much. Characters made decisions  that I just didn’t buy and things happened that made me go “oh no you didn’t!” and even though I kept turning the pages I can’t say that I enjoyed the book quite as much at the end as I did at the beginning.

Nevertheless, Orphan Train is an entertaining and well-written novel about a relatively unknown part of American history and many readers would certainly enjoy it.