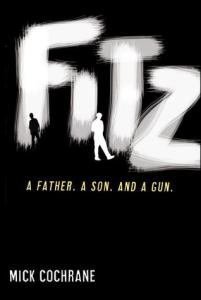 Mick Cochrane’s YA novel, Fitz, is the story of what happens when a boy decides to confront the father he’s never met.

Fitz is a “typical fifteen-year-old boy. A sophomore on the B honor roll. A kid with a messy room, an electric guitar, a notebook full of song lyrics, vague dreams about doing something great some day, a crush on a red-haired girl.”

And like many other teens, Fitz (short for Fitzgerald) lives with his single mom. His father is an unknown entity; his mother doesn’t talk about him and although he supports Fitz financially, Fitz knows nothing about him. That doesn’t mean Fitz doesn’t think about him, though.

When Fitz was a little boy, he liked to imagine that his father was quietly, secretly watching over him, loving him, for his own good and unselfish reasons, from a distance.

Circumstances have changed, though. Fitz has inadvertently discovered his father’s home address and he’s decided to confront his dad, which, sure, that seems plausible enough. What doesn’t seem quite as likely is the fact that Fitz takes a gun with him and pretty much kidnaps his father. It’s a scenario that could go horribly wrong.

Turns out, though, that Fitz’s father, Curtis, is a decent guy – clearly, he’s been paying support all these years. Over the course of the day the two listen to music, hang out at the zoo, have lunch and visit Curtis’s office (he’s an attorney). As the day unfolds, Fitz tries to figure out what it is he really wants to know about his dad and Curtis, it seems, is only too willing to talk, has – in fact – been waiting for fifteen years to have this conversation with his son. It’s kind of sweet, really.

“You were a good baby, a beautiful baby,” that’s how he starts. That’s his once-upon-a-time. He says that Fitz was healthy, bright-eyed, curious. He had amazing blue eyes. It’s just that he didn’t sleep, at least not for long stretches.

Fitz is sensible enough to listen as his father tries to explain the story of his relationship with Fitz’s mother and smart enough to realize that even parents make mistakes because, in their own once-upon-a-time, they were young enough to make them. If the story seems just a tad sentimental, Cochrane can be forgiven because Fitz is a likeable character and, thankfully, the gun is little more than false bravado.