When Elle’s mother’s boyfriend decides he doesn’t like her, Elle’s mother sets her up in an apartment across town. The town happens to be New York and Elle is just 16.  Catherine Ryan Hyde takes an almost unbelievable premise (like, what mother turns her kid out because she wants to placate her boyfriend?) and spins it into the beautiful and moving coming-of-age story Jumpstart the World. 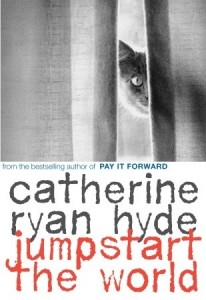 He had a big, friendly smile and there was something cute about him, but in a soft sort of way. Hard to explain what I mean by soft. Gentle, I guess I mean. He made you try not to find fault with him for some reason. The kind of guy it’s hard not to like.

Jumpstart the World is populated with other interesting and sympathetic characters, too, particularly the group of friends Elle makes at her new school. There’s Shane aka Larissa, blue-haired and gay; the Two Bobs – a gay couple; there’s Wilbur, a quiet guy who wears make-up.  These friends have varying degrees of influence on Elle’s life and are also responsible for the novel’s conflict. When they meet Frank,  they point out what is not obvious to Elle: Frank is transgender.

It’s pretty remarkable that there’s a book like this available for teens. It’s the first book I’ve ever read featuring a transgender character, but the fact that Frank is doesn’t mean that Ryan Hyde starts to get all preachy. We might expect that since this story takes place in NYC, the world is filled with individuals ready to embrace everyone’s differences, but – of course – the world isn’t quite so open-minded and, as it turns out, Elle has some reconciling of her own to do.

Jumpstart the World actually tackles the questions of trust and family and what it means to give your friendship and love to another human being, regardless of their sexual orientation. There aren’t any easy answers in life and it might be a bit much to expect a teenager to figure them out, but each of the characters in this book have had their own life-altering experiences. And interestingly, Elle’s journey – painful as it is – also helps her to make a kind of peace with her mother.

I enjoyed this book. I liked spending time with Elle. I appreciated that her journey was a little left of center, but that she discovered – as she does with her cat, Toto, that sometimes “you just have to take a deep breath and let somebody love you.”