Lilac Girls, the debut novel by Martha Hall Kelly,  is the first novel for my book club’s 2016-17 reading year. When it was chosen I can’t say that I was all that interested in reading it. We have all summer to read the book chosen for our first meeting of the new reading year, but I tend to like to read fast, snappy thrillers/mysteries in the summer – with the occasional YA or lit fic thrown into the mix. Also – not a tremendous fan of historical fiction. But I always read the book club selection because our get-togethers are a lot more fun when I’ve read the book. All this to say that I started this novel with a relatively negative attitude. 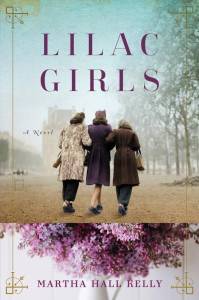 Kelly’s novel tells the story of three very different women: New York socialite Caroline Ferriday, Polish teenager, Kasia Kuzmerick and German doctor Herta Oberheuser. It is 1939 and the one thing these women have in common is Adolf Hitler.

Caroline is 37 when the story opens. She’s a retired actress who volunteers at the French consulate. Kasia is just 16 when Germany invades Poland and changes her life forever. She is working as a courier for the underground resistance movement when she and her older sister, Zuzanna, and their mother are arrested and shipped off to Ravensbruck, a Nazi concentration camp for women. It is there that she encounters Herta, a young doctor who has taken a post at the camp because it is difficult for women in the medical field to find work.

The novel is told in three separate first person narratives and once the book gets going it’s almost impossible not to be carried along by the horrors of Ravensbruck and Kasia’s desperate attempts to survive. There’s also a little angsty love story between Caroline and famous French actor Paul Rodierre.  I read the first 200 pages in one sitting.

Caroline and Herta are real people, as Kelly explains in her notes. Kazia and her sister are

“loosely based on Nina Iwanska and her physician sister, Krystyna, both operated on in the camps.”

It is almost impossible not to invest in these characters, and the sections concerning Kasia in Ravensbruck are particularly harrowing. There, she and her sister are among hundreds of women used as real-life guinea pigs (or “rabbits” as they are called) for the Ravensbruck doctors to experiment on. Herta’s participation in these horrific experiments,  crimes that are against every aspect of the Hippocratic oath, seal her fate as a villain.

The book is long and the ending seemed a little rushed to me and I could never figure out the title or the dumb book cover- which makes it seem like three girls are the best of friends. I also wasn’t fussy about Kasia and Herta’s showdown, but ultimately Lilac Girls was a good read.