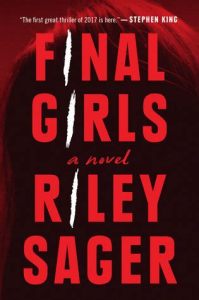 I didn’t realize that the term “final girls” actually referred to the last girl standing in a horror film. I chalk it up to not being a fan of stalker-type films; I can’t deal with the violence.  According to Vox “Final Girls are tough enough and strong enough to make it to end — the only people still standing when the last trickle of blood has hit the floor.” (It’s worth reading the whole article, actually, as it’s a really interesting look at Final Girls.)

Riley Sager (a  pseudonym for author Todd Ritter – and what is it about all these pseudonyms lately?) has taken this horror movie trope and spun it into his best seller Final Girls…although I would disagree with the ‘best’ part of it.

Ten years after her best friends were massacred in a remote cabin, Quincy Carpenter, the only survivor,  is still trying to recover. Now she’s a NYC baking blogger living with her lawyer boyfriend in NYC. She smooths out the rough edges of her life with Xanax, a little kleptomania, and sporadic visits with Coop, the cop who saved her life that night in the woods. He’s her touchstone, the one person who understands what she endured and ultimately survived that night when she escaped from Him. (That’s what Quincy calls the killer – a moniker that never stopped reminding me of  a BDSM master/slave.)

She’s not the only Final Girl, though. There’s Lisa, who survived a sorority house massacre at the hands of a crazed psycho and Sam, who lived through the Sack Man’s rampage at the Nightlight Inn. Lisa reaches out to Quincy with an offer to teach her how to be a Final Girl.  Sam is MIA until she unexpectedly shows up on Quincy’s door and Quincy’s life begins to unravel.

It’s Lisa’s death – an apparent suicide –  which is the catalyst for Sam’s arrival in New York and Quincy’s sudden departure from her quiet life. Sam is a bit of a wild child and suddenly Quinn’s drinking too much Wild Turkey and walking through Central Park after midnight – just looking for trouble. Sam provokes Quinn.

I want to see you get angry. You’ve earned that rage. Don’t try to hide it behind your website with your cakes and muffins and breads. You’re messed up. So am I. It’s okay to admit it. We’re damaged goods, babe.

The past starts closing in on Quincy and the book definitely does pick up some momentum even if I didn’t believe the ending one bit.

Final Girls suffers in comparison to  The Woman in the Window even though the books aren’t strictly in the same genre. I started Final Girls and read probably 100 pages and then started The Woman in the Window, which I absolutely couldn’t put down, even though I did figure out some of the twists in advance. Final Girls just felt clunky to me by comparison. Quincy is shrill and not particularly sympathetic and yes, of course, she survived a horrific event and I should cut her some slack, except that I just didn’t  care about her.

I am a big fan of psychological thrillers and I am definitely in the minority here. Even Stephen King called this book “the first great thriller of 2017.” For me, Final Girls just didn’t fulfill its blood-spattered promise.