Dear Mrs. Bird by AJ Pearce is one of those frothy, inconsequential novels that is 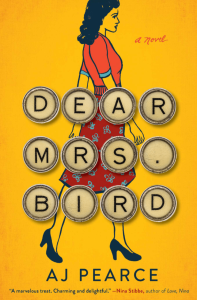 easily read and just as easily forgotten. I actually read the first thirty pages or so and put it down; I only picked it back up and finished it because it was a book club pick and I hate going to book club without having read the book.

Emmeline Lake lives with her best friend, Bunty, in London during WW2. Emmeline works at a solicitor’s office and volunteers at the Auxiliary Fire Service, where Bunty’s boyfriend, William is a volunteer firefighter. What Emmeline aspires to, though, is becoming a Lady War Correspondent and she thinks she’s hit paydirt when she sees an advertisement in the paper for a Junior at The London Evening Chronicle.

For the last ten years – ever since I’d won a trip to the local newspaper as a prize for writing a quite dreadful poem when I was twelve – I had dreamt of a journalistic career.

Turns out, the job isn’t much more than glorified secretary to Mrs. Bird, Woman’s Friend’s  agony aunt. (Woman’s Friend being the poor relation to The Chronicle.)  Emmy is shocked and dismayed to realize that she’s taken the wrong job, but gives a “plucky Everything is Absolutely Tip Top Smile.”

Mrs. Bird has a strict policy about the sort of letters she will and will not answer in the magazine. Letters concerning marital or premarital or extramarital relations are to be binned. Mrs. Bird will not deign to answer queries about physical relations, illegal activity, politics, religion, the war or cooking. There’s also a long document containing a list of “Words and Phrases That Will Not Be Published Or Responded To By Mrs. Bird.”

Emmy feels stifled by her inability to help the people who write to Mrs. Bird looking for a light in what is clearly often a dark time. And this might have been an entertaining story, if it weren’t for the fact that Emmy is annoying and the story is pretty much a “you-can-see-it-coming-for-a-country-mile” romp.

For starters, Pearce capitalizes random phrases in the middle of sentences so, I think, you can hear how British and, well, to steal a phrase from Emmy herself, plucky these characters are.

Bunty said rather too quickly that the army always lets you know if something awful had happened so No News Is Good News and then Bill took up the baton and said Don’t You Worry, Emmy, Edmund Is Made Of Very Stern Stuff.

I can’t tell you how annoying that got after a while. The story sort of veers away from the letter writing, too, once the ‘tragedy’ happens. It all gets knit together in the end, though, So That’s All Right.

Ultimately, Dear Mrs. Bird wasn’t my cup of tea, even though it might have been a winner in different hands. I will be passing this book on to my 80-year-old aunt. I think she will love it.