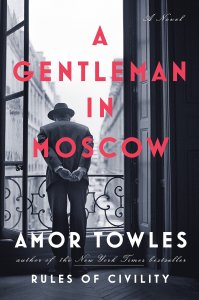 divided our group. It’s the long-winded story of Count Alexander Rostov, an aristocratic Russian in Moscow, who is sentenced to house arrest for writing the long poem Where Is It Now? which is deemed by the authorities as “a call to action”. The tribunal determines that Rostov has “succumbed irrevocably to the corruptions of his class – and now poses a threat to the very ideals he once espoused.”

Instead of being executed, though, Rostov is sentenced to house arrest. Since he currently lives at the luxurious Metropol Hotel, that hardly seems like a hardship, but Rostov is told that if he “should ever set foot outside of the Metropol again, [he] will be shot.”

Turns out that Rostov will not be returning to his luxurious apartment on the third floor. He is moved to a small space in the attic, which was

“originally built to house the butlers and ladies’ maids of the Metropol’s guests; but when the practice of traveling with servants fell out of fashion, the unused rooms had been claimed by the caprices of casual urgency – therefore warehousing scraps of lumber, broken furniture, and other assorted debris.

Rostov, as is his nature, finds a way to make the best of his new circumstances. He coasts along over the next several decades, making friends with the hotels guests and employees with ease. That’s because, we are to understand, he is charming, self-effacing and genuine. People – most people anyway – gravitate towards him.

I was in the group of people who didn’t enjoy A Gentleman in Moscow. My friend, Michelle, chose the book and she thought it was the best book she’d read in the last decade.  She thought the novel was filled with meaningful observations about life; I thought the novel was an elliptical, superficial ride to nowhere. I kinda love that about literature, how it can mean different things to different people.

It’s necessarily character-driven because except for flashbacks to his childhood, Rostov is trapped in the Metropol. The novel depends on other characters to give the plot momentum. The characters are, therefore, suitably colourful: a precocious little girl, a college friend who visits, the seamstress and barber, the chef. There’s a lot of talk of food and wine.

For me, A Gentleman in Moscow is like a souffle. All show, no real substance.