Last night I dreamt I went to Manderley again.

The opening line of Daphne du Maurier’s brilliant novel Rebecca will be instantly recognizable, likely even to readers who have never read it. In that book, the unnamed protagonist meets Maxim de Winter and embarks on a whirlwind courtship. They marry and he brings her home to Manderly, his estate on the Cornish coast. It is there that the narrator’s troubles begin because Manderley is haunted by Rebecca, Maxim’s first wife, who was (apparently) beloved by all. Rebecca is a riveting read. 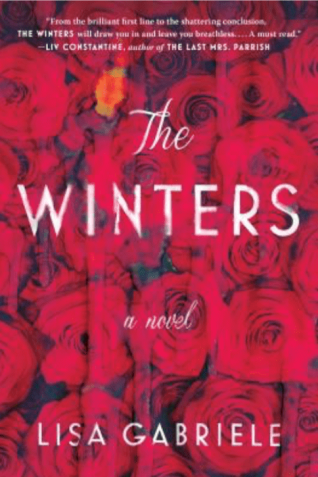 Lisa Gabriele treads…tromps…through du Maurier’s landscape in her novel The Winters and although I am in the minority, I am sure, I feel as though this book suffers by any comparison to its source material. But you have to compare them because Gabriele’s story is “inspired” by du Maurier’s.

In The Winters the unnamed narrator is a dog’s body for a boating company in Grand Cayman, where’s she’s grown up with her parents who were “disillusioned Americans who chose to live and work on a small fishing trawler.” Now both her parents are gone, and she is still working for Laureen, the brash Australian who owns the charter boat company.

Our plucky narrator tells us that

My features are even, my body trim, hair, eyes and skin compatible with each other in ways that make sense. Even my character, self-sufficient and serious-minded, watchful and earnest, doesn’t draw attention to itself. Men do not clamour after me.

Even though the former Mrs. Winter has been dead for almost two years, the house is still full of reminders and our narrator has trouble finding her footing. Dani, when she finally returns from Paris, takes an immediate dislike to her, and the narrator doesn’t have any experience with teenagers anyway. Dani mostly holes up in her old mother’s turret bedroom, smoking weed and (seemingly) plotting ways to make the narrator’s life miserable.

My issues with The Winters don’t really have anything to do with the story. I mean, if you’ve never read Rebecca I think you’ll probably find the plot of this one engaging enough. I was frustrated reading this book, though. I think my main problem was with the characters themselves; I just didn’t believe them. I certainly didn’t believe the way they spoke to each other. There wasn’t any real chemistry between the narrator and Max and the denouement, when it arrived, had wayyyy too many contrivances.

It’s a beach book. It doesn’t ask anything of you, and I suspect many readers will find it diverting and entertaining. For my money, though, Rebecca is a much more satisfying read.