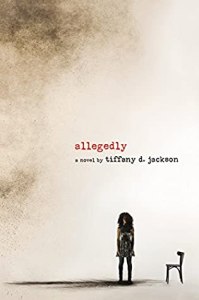 Fifteen-year-old Mary, the protagonist of Tiffany D. Jackson’s debut YA novel Allegedly, lives in a group home in Brooklyn. She has a tracking device on her ankle, no friends except for her boyfriend, Ted, and a reputation for being ‘psycho.’ How did she earn that reputation? When Mary was nine she killed a three-month-old baby named Alyssa who was in Mary’s mother’s care. Well, she allegedly killed Alyssa.

Before she came to live in the group home, she was in a state facility with adults. She was mostly mute and mostly locked up in solitary confinement. Now, with a little more freedom, she is desperate to make something of herself. She wants to write the SAT, not as ridiculous as it sounds because she is extremely clever – everyone says so. Although she doesn’t really have any positive adults in her life (the two women who look after the group home are awful, as are the other girls who live there; her mother is self-centered zealot and has mental health issues; the court appointed counselor who visits once a week is ineffective ), Mary is determined to get an education.

This is a novel that looks at all the ways that the system fails young people who might find themselves on the fringes of society. Mary tells her own story (one of physical, emotional and sexual abuse)  without self-pity. Too young to articulate what might have actually happened on the night Alyssa died, Mary did as her mother instructed and kept her mouth shut. When she finds herself pregnant, and realizes that there is no way that the state will allow her to keep her baby, she has something to fight for.

When Mary finally finds a couple champions for her corner including a lawyer willing to investigate her claims that she’s not guilty and a teacher willing to help her prepare for the SATs, it’s hard not to root for Mary. And it’ll be hard not to turn the pages either despite the often gruesome subject matter.

Allegedly is my second novel by Tiffany D. Jackson. I read and enjoyed her book Monday’s Not Coming last year. Her work is definitely worth checking out.