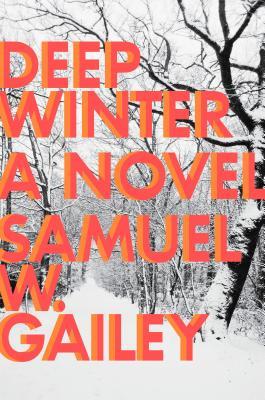 My son actually purchased this Samuel W. Gailey’s novel Deep Winter because he liked the cover. In my experience, this isn’t generally a great way to choose a book, but when he was doing a purge this book ended up off his bookshelf and on mine because I thought it sounded good.

This is the story of Danny Bedford, a man who, when he was a kid,  suffered brain-damage after a near drowning that cost him the lives of both his parents. Since then he has been raised by an abusive uncle and now lives a solitary life over the laundromat where he works. His only friend is a waitress named Mindy.

Danny lives in Wyalusing, a backwater town in Eastern Pennsylvania. When the novel opens, Danny has trekked the three miles out to Mindy’s trailer to deliver a carved bird he’s made for her birthday. He comes across a scene of horror: Mindy is dead.

Her body sprawled out on the trailer floor next to Danny like a discarded rag doll. He knelt beside her with his hands folded and clenched together in his lap, like he was praying at her bedside. Blood soaked into the faded carpet from an open wound on the back of her head, and a few pieces of jagged glass were still stuck in her scalp.

Because Danny intellectually impaired, it’s easy to pin Mindy’s death on him, and that’s exactly what happens. What follows is the story of that death, and the malevolent tendrils that reach out into the community because of it.  The story is told from multiple points of view, which probably helps things move along.

Gailey’s novel is populated by a relatively unpleasant cast of characters, most notably Sokowski, the Deputy, and his side-kick, Carl. In fact, the villains are so awful they’re almost caricatures. It takes place in the dead of winter, during a storm, and is almost relentlessly grim.

Gailey has written for film and TV and that’s how Deep Winter reads. There’s not a lot of literary bells and whistles, here. That’s not a criticism, really, although I didn’t love the book. It’s a straightforward, nuance-free crime thriller and I doubt you’d have any trouble turning the pages.