A chance encounter with the relative of Bobby Rupp, one of the original suspects in the deaths of the Clutter family, inspired Amy Brashear to write No Saints in Kansas. In this YA novel, Brashear reimagines the murders, made famous in Truman Capote’s masterpiece of non-fiction In Cold Blood, from the point of view of fifteen-year-old Carly Fleming. Although she is a work of fiction, her father, Arthur, is the lawyer who ultimately defends one of the two men convicted of the homicides. 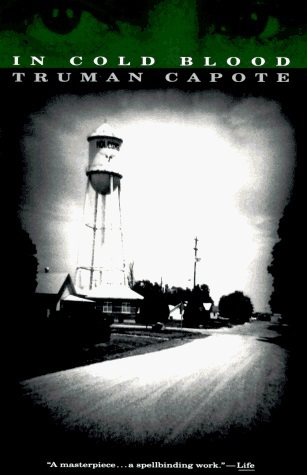 Carly and her younger brother Asher and their parents have relocated to Holcomb, Kansas from New York City after one of Mr. Fleming’s cases goes sideways. Holcomb is a backwater compared to Manhattan, and Carly has a hard time fitting in. She is an “outsider” and no matter what she does, it feels like she always will be. From her point of view, the way “in” is through Nancy Clutter because “Everyone likes – I mean, everyone liked – the Clutter family.” It feels like a dream come true with she is asked to tutor Nancy, although Nancy seems less happy about it. In her imagination, Carly imagines that tutoring Nancy is

…how we became best friends. From that moment on, we were inseparable. We were attached at the hip. At lunch, at 4-H club, at every school event, double dates, sleepovers, I was popular by association.

When the Clutters are found dead in their home, and Carly learns that Nancy’s boyfriend Bobby is a suspect, she is determined to clear his name. She snoops in ways that are, truthfully, wholly unbelievable including a visit to the Clutter farm post-murders and stealing documents from the courthouse.

Although the real-life Clutter murders are the backdrop for Carly’s story, this is just as much about what it is to not fit in. Holcomb is a tight-knit community where everyone knows everyone. Some of the teens in Carly’s orbit are downright mean to her. Her one “friend”, Mary Claire, runs hot and cold. No Saints in Kansas is as much about navigating an awkward adolescence as it is about the Clutter crime.

For anyone who has read In Cold Blood this book will obviously pale in comparison. Capote’s book, which I read many, many years ago, is meticulously researched (interestingly, Harper Lee spent time in Holcomb acting as Capote’s researcher), but still reads like fiction. Capote reconstructs the Clutter’s last day, follows the investigation and also paints a picture of their murderers that is often quite sympathetic, particularly towards Perry Smith, with whom Capote had a close relationship.

None of this is to say that Brashear’s  book is without merit. I think most younger readers would find it compelling enough and reading it  might encourage them to tackle Capote’s book, too.