The Nickel Boys won Colson Whitehead his second Pulitzer Prize. (He also won for The 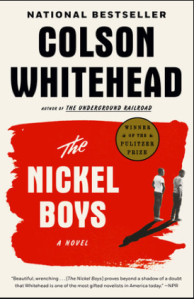 Underground Railway in 2017.) And now I pause because I am afraid of this review.

Anyone who reads my reviews will know that I generally don’t have any trouble sharing my feelings about books, but I am nervous about this one. Why? Is it because it won the Pulitzer. No. I had no trouble talking about Olive Kitteridge or The Goldfinch. Or is it because it speaks very specifically about an experience that I can never truly understand as a white, middle-aged woman living in Canada? Um, no. I have no personal experience with the horrors of concentration camps (Lilac Girls) or  dealing with the supernatural (any Stephen King book ever).

I started reading, and I kept thinking, what if I don’t love it, what if I just think it’s okay, will people accuse me of being racist? But here’s the thing that my very smart newly adult children have taught me: I probably am racist in all sorts of little ways that I don’t even realize, ways that come from being born into the white middle class. Sure, as a woman, I have my own row to hoe, but my experiences as I’ve gone through this life have been mostly positive. Now comes the question of how those experiences inform my reading of Whitehead’s novel.

The Nickel Boys  is inspired by a real place, the Dozier School for Boys located in Marianna, Florida. The reform  school operated from 1900 until 2011, despite being investigated for allegations of abuse many times during its 111-year history. There are many excellent articles about the school online, including this one  published in The Washington Post in 2019.

In Whitehead’s fictionalized account, Elwood Curtis, a bright, scholarly young man ends up at the Nickel Academy because he just happened to be in the wrong place at the wrong time. Elwood is an idealist. He believes in the teachings of Martin Luther King, Jr. (whose words are sprinkled throughout the novel.) Elwood is going to change the world and the first step is getting an education. His life is upended when he is sent to Nickel and at first he is optimistic.

He got a look at the school and thought maybe Franklin was right – Nickel wasn’t that bad. He expected tall stone walls and barbed wire, but there were no walls at all. The campus was kept up meticulously, a bounty of lush green dotted with two – and three-story buildings of red brick. The cedar trees and beeches cut out portions of shade, tall and ancient. It was the nicest looking property Elwood had ever seen – a real school, a good one, not the forbidding reformatory he’d conjured the last few weeks.

Of course, Elwood’s optimism is misplaced. Nickel is a horror-show and it doesn’t take long for Elwood to find himself the target of abuse. It would be almost impossible for any reader not to read this book without a knot of dread in their stomach. And I did care about Elwood, but I also found that there was an element of didacticism in this novel which prevented me from wholly investing in Elwood’s awful journey.

I need the lesson. I need ALL the lessons because of my privileged position. I am becoming more and more aware of my blind spots and I think literature is a wonderful way for me to have experiences which are far removed from my own. I think of Angie Thomas’s YA novel The Hate U Give which made me think all sorts of thinky thoughts and also moved me to tears. I was wholly invested in Starr’s journey because it forced me to look at myself and also gave me a window into a life which is very much not my own.

I want to be a more thoughtful person, a more woke individual. It’s my duty as an educator and as a human being. I look to stories to help me on my journey, to help me see around those blind corners I know I have. I am not saying The Nickel Boys  will not have a part to play. Three times as many black boys died at Dozier compared to white boys (Smithsonian Magazine) and you only need to look at what’s happening in the world to know that people of colour are mistreated in ways that are, frankly, shocking. We need to do better. If Whitehead’s novel helps push us forward because we read it and  start to understand the inequity that exists, then that’s a win.

But as a piece of ‘fiction’ I guess it was just okay for me. It seemed as though the book was more interested in telling the story rather than Elwood’s  story and maybe that was a deliberate choice. As a reader, though, I needed an emotional centre and although there is a little twist that I didn’t see coming, I finished the book feeling rather underwhelmed.