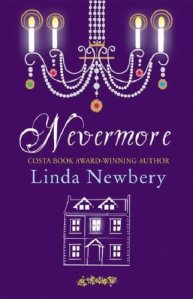 This is the kind of book I would have loved as a young reader. Plucky heroine, manor house in the English countryside, an intriguing mystery. The problem for me, of course, was that I solved the mystery early on – but that doesn’t mean the book wasn’t fun to read.

Twelve-year-old Tizzie and her mother, Morag,  have moved to Roven Mere, where Morag has taken a job as a cook. The huge estate is a constant source of intrigue, especially for Tizzie, who hopes that for once Morag will give up the wanderlust that has driven them from town-to-town most of her life.

Owned by Sir Rupert Evershall, but run by the crusty Finnigan, Roven Mere is always at the ready for the return of Sir Rupert and his young daughter, Greta.

“Oh, I’ve never actually met him,” said Mrs. Crump. None of us have. Only Finnigan. We’re expecting him home in a week or two. Him and his family. Very exciting it’ll be, meeting them at last.”

Tizzie spends her early days exploring the house – which does seem to be in a constant state of readiness for Sir Rupert and Greta’s homecoming – making friends with Davy, Mrs. Crump’s grandson, and trying to manage her mother’s moodiness.

The book is intended for younger readers whom I am sure would be charmed by Tizzie, the novel’s mystery and Roven Mere itself. I certainly was.

AT HOME: The Seventh Book of Wonders – Julianna Baggott