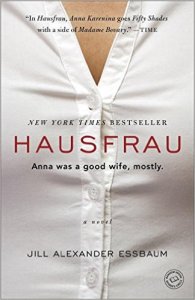 Poor Anna. Her life sucks. She’s the protagonist in Jill Alexander Essbaum’s novel Hausfrau,  an American living in Dietlikon, a suburb of Zurich, with Bruno, her Swiss banker husband and her children: Victor, 8, Charles, 6, and baby Polly. She doesn’t work. She’s barely even learned to speak the language despite having lived in Switzerland for almost a decade. Her mother-in-law seems wholly unimpressed with her – and no wonder: Anna disappears for hours, taking language classes and having sex with random men.

It’s hard to really like Anna very much. She’s not the effusive American one might expect. Instead of joining the other mothers when she meets her sons at school she “scuffed the  sole of a brown clog  against the sidewalk’s curb…fiddled with her hair and pretended to watch an invisible bird flying overheard.”  She claims she is “shy and cannot talk to strangers.”  That may be true, but she speaks the universal language just fine.

Archie and Anna shared a plate of cheese, some greengage plums, a bottle of mineral water. Then they set everything aside and fucked again. Archie came in her mouth. It tasted like school paste, starchy and thick. This is a good thing I am doing, Anna said inside of herself, though “good” was hardly the right word. Anna knew this. What she meant was expedient. What she meant was convenient. What she meant was wrong in nearly every way but justifiable as it makes me feel better, and for so very long I have felt so very, very bad.

Oh, well, that’s all right then. You just go ahead and fuck whomever you please without any regard for anyone else but yourself because, clearly, life is rough for you. Oh please.

I am not a prude. I think everyone deserves a chance to be happy. The problem with Hausfrau is that I didn’t care one bit about Anna and by the time Essbaum actually gave me a reason to care about her it was too late. Anna is a hot mess and for no good reason that I can see.  She’s whiney and self-centered and in one instance, treats her adored younger son, Charles, so deplorably that there was just no way for me to like her after that.

Okay – maybe I am being too harsh. I mean, it’s tough to be a modern woman. Like, she’s got three kids and she lives in a foreign country and her husband is a stoic workaholic. Oh, wait, she comes and goes as she pleases. She doesn’t have to worry about money. She recognizes that her affairs are a product of her “longing for diversion…and from boredom particular habits were born.” No Netflix in Switzerland, eh? How about knitting or a good book, Anna?

Not even her psychoanalyst, Doktor Messerli, is able to offer any real useful advice. Instead, she imparts pithy gems like “Shame lies. Shame a woman and she will believe she is fundamentally wrong, organically delinquent.” And when it is clear Anna is desperate, the good doctor tells her to stop ringing her bell and leave immediately. Okay, then.

Critics loved this book. I did not.