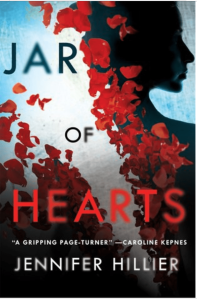 actually a bit surprised that I even picked up Jar of Hearts. I guess I didn’t put two and two together before I forked over my money. I am happy to report that Hillier has redeemed herself a little in my eyes because Jar of Hearts wasn’t nearly as cringeworthy as Creep. In face, I liked it quite a bit until the end.

Georgina (Geo) Shaw’s perfect life (rich fiancé, six-figure career) comes crashing down around her when the mutilated body of her best friend Angela Wong is found fourteen years after she disappeared. For her part in the murder, Geo will spend five years in the Hazelwood Correctional Institute. Calvin James, her boyfriend at the time, is connected to three other murders and will likely serve consecutive life sentences. This is the first time Geo has seen him in a very long time and

When their eyes meet, a tingle goes through her. That goddamned tingle, even now, even after everything. From the first day they met to the last day she saw him, that tingle has never gone away. She’s never felt anything like it before, or since.

Jar of Hearts follows Geo through her stint in prison, where she’s savvy enough to make friends with the right people. When she is released, she returns to her childhood home. She’s not particularly welcome in Sweetbay (a suburb of Seattle), but she has no place else to go. She reconnects with her childhood friend, Kaiser Brody, who is now a cop. And then new bodies start to show up.

I liked this novel so, so much better than Creep. While not flawless, Geo was a likeable character. I understood her attraction to Calvin (who was not straight-up evil) especially at the beginning when she was only sixteen and living in Angela’s considerable shadow.  Hillier does a good job of capturing those heady teenage years when you make dumb choices and hurt the people you love. The flashbacks allow us to see what happened to Angela and why.

Some readers will likely like the novel’s ending twist. I wasn’t a big fan, but it didn’t ruin my overall enjoyment. Jar of Hearts was fun to read.