Nina LaCour’s award-winning YA novel We Are Okay, is a lyrical and moving look at the 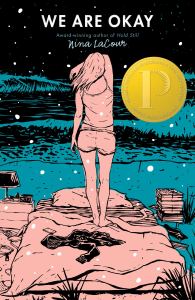 nature of grief. This is a quiet novel, and so I would caution readers not to expect histrionics or very much action. Instead, LaCour focuses on the protagonist’s interior life, which has been altered by loss.

Eighteen-year-old Marin is attending school on the East Coast, far away from her hometown, San Francisco. It’s Christmas, and everyone has left the dorm except Marin, who has no place to go. Her roommate, Hannah, is clearly worried about her and Marin knows

why she’s afraid for me. I first appeared in this doorway to weeks after Gramps died. I stepped in – a stunned and feral stranger – and now I’m someone she knows, and I need to stay that way. For her and for me.

Marin is anticipating the arrival of her best friend, Mabel.  She knows “Mabel is coming tomorrow, whether I want her to or not.” The idea fills Marin with a sort of dread, even though she knows she should be happy.  She hasn’t communicated with Mabel in months though, and has, in fact, ignored all of Mabel’s attempts to make contact. She thinks she can fool Mabel into thinking that everything is okay but

Mabel knows me better than anyone else in the world, even though we haven’t spoken at all in these four months. Most of her texts to me went unanswered until eventually she stopped sending them.

There will be no way to fool her.

Nothing much happens in We Are Okay, but that’s just plot, anyway. The story toggles between Marin’s reunion with Mabel and the story of their friendship back in California. We also learn that Marin has been raised by her grandfather, a fierce but tender man, who has a few secrets of his own. Her grandfather’s death clearly accounts for some of Marin’s sadness, but flashback’s reveal that Mabel is also central to Marin’s story.

There is a lovely, melancholy cadence in LaCour’s book. It’s poetic without being showy and the nature of Marin’s grief is unspooled in a way that will keep readers turning the pages. I guess that’s what prevents We Are Okay from being all doom and gloom. Yes, Marin is sad, but she’s trying to come to terms with her derailed life. She finds small ways to tether herself to the world, a pair of pottery bowls, the “perfect shade of yellow” for instance.

This is a thoughtful, lovely and moving novel and I highly recommend it.