I haven’t read anything by Stephen King since Joyland but I am a fan from wayyyyy back. Despite the often creepy subject matter, King is like book comfort food. I know when I read him, I will not be disappointed (The Tommyknockers aside). The Outsiders delivers in every category…and lucky for me I started it at the beginning of my March Break because I could not put that 560 page sucker down.

Flint City, Oklahoma is a quiet little ‘burb, but something horrific has happened there. 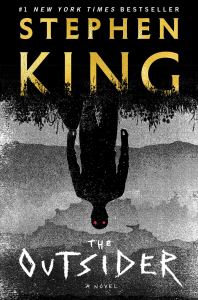 Eleven-year-old Frank Peterson has been found dead in the woods. The crime is unspeakable – so I won’t speak of it here, you’ll get enough of it in the book – and Detective Ralph Anderson is determined to catch the psycho who committed the crime posthaste.

It actually turns out to be a pretty easy case to crack: the DNA evidence is ironclad and there’s a handful of reliable eye-witnesses. Soon, Anderson is arresting Little League coach Terry Maitland.  Maitland, a high school teacher and well-respected member of the community, maintains his innocence, and there’s irrefutable evidence to prove that he didn’t kill Frankie. Like the detectives and the District Attorney, you’ll be trying to figure out how any of this is possible. And then, about half way through the book,  you’ll be reminded that you’re in King territory and he doesn’t play by the rules.

The Outsider is a puzzle of a book and in some ways it sort of reminded me of It, which is probably my favourite King novel. I mean, there’s not really a lot of similarities, except that a strange assortment of people gather together to fight evil, but the showdown at the end of The Outsiders gave me all-the-feels.

Here’s what I have always admired about Stephen King. He writes a cracking good story. The writing is unpretentious. It doesn’t get in the way, as writing often can. Story is king (excuse the pun) and he just lets his characters go about their business. And his characters are believable. You’ll root for them; you’ll care for them; you’ll want them to be safe. (Can’t help you with that, unfortunately. As King famously said in his memoir On Writing, “Kill your darlings, kill your darlings, even when it breaks your egocentric little scribbler’s heart, kill your darlings.”)

If I have one niggle – and it’s so tiny and insignificant it’s hardly worth mentioning, but I will just so I don’t go full-on fangirl – sometimes, occasionally, the dialogue made me wince just a teensy bit.

But who cares?! Seriously. I had a ball reading this book. It’s all kinds of awesome. And the HBO series looks pretty dang good, too.