I am very excited to turn this blog over to my 15-year-old son, Connor, for his review of 1Q84 by Haruki Murakami. 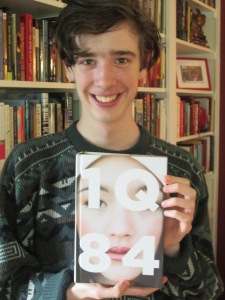 A strategy I use often to pick books, one which my mom wholeheartedly disagrees with, is by cover only. I had never heard of Murakami before (I don’t know how, he takes up nearly an entire shelf of the fiction section at the book store, and has been on the scene since the late seventies) but when I saw the cover of 1Q84, designed by Chip Kidd, I thought it was a masterpiece, and bought the book. When I told people that the Murakami I was starting with was 1Q84, his 1150 page contemporary odyssey, they were shocked and confused, wondering why I didn’t start with something modest like Norwegian Wood or The Wind-Up Bird Chronicle. I soon found out why.

1Q84 alternates chapter by chapter between Aomame and Tengo, both 30 or so and living in Tokyo. Aomame is an isolated woman who works as a physical therapist and personal trainer for an elderly woman living in a grand estate, (though she has a second job which is… interesting, to say the least, but I won’t give anything away.)

Tengo is a struggling novelist slash cram school math teacher who is convinced by editor Komatsu to take part in a dangerous plan that will shock the literary scene. Komatsu, seeing the potential in sixteen year old Eriko Fukada’s short story, which she submitted to a contest, ropes Tengo into re-vamping it and publishing it as a novel.

These two characters share a metaphysical connection from their days spent in the same elementary school, but have since drifted very far apart. As a student, children were put off from Aomame because she was fanatically religious and from Tengo because he was the son of an aggressive, work obsessed NHK fee collector. Over the course of the novel, they are slowly drawn back together by the strange series of events, and each character’s utterly depressing past is revealed, much to the dismay of the reader.

The book itself is split into three parts. The first part takes place between April and June, the second between July and September, and the third between October and November. The first two parts I really loved, mostly because so much was happening and because I instantly took to both Tengo and Aomame. I regret to say that in the third part, the book crashed and burned. I can’t quite explain why without giving anything away, but let’s just say there is a violent change in pace and the density and speed (as Donna Tartt would say,) that Murakami had built up over those 600 or so pages, slows nearly to a stop. It was like a disappointing punch to the gut.

Luckily, 1Q84 has a really pretty and ever so slightly redeeming ending, enough to stop me crying about it, but just barely.

Reviewers are far too hyperbolic about this book, trashing it every chance they get. That’s ridiculous. It’s a huge book, and I have no trouble believing that it’s the magnum opus of his career. He is clearly a talented writer, and it’s clear that 1Q84 was an immensely challenging novel to write. It’s 1 000 pages long for heaven’s sake!