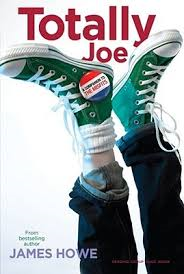 When Joe Bunch is given an ‘alphabiography’ as a seventh grade English project he thinks it’s lame. Joe’s teacher, Mr. Daly wants students to write about themselves from A-Z and that’s all well and good, except as Joe writes “I’m not exactly your average Joe.” But that, as it turns out, is just one of the many charms of Totally Joe by James Howe.

Howe is a prolific writer; he’s written over 70 books including the Bunnicula series. Totally Joe is also part of a series, The Misfits. Anyone who has read that book will be familiar with Joe and his friends, Addie, Skeezie, and Bobby, but you don’t need to have read it to fully appreciate Totally Joe.

It won’t take the reader very long to figure out that Joe is gay. When he meets Addie for the first time she says: “I thought you were supposed to be a boy. Why are you wearing a dress?” They were four at the time and have been fast friends ever since.

Joe is totally self-aware. It’s one of the pleasure of Totally Joe, really, that he is a person who understands and accepts himself. That doesn’t mean he’s not susceptible to the taunts of others. For instance, Kevin Hennessey who has “an IQ smaller than his neck size” has been picking on Joe forever.

Somehow, though, despite the name-calling, Joe manages to rise above and he does this with the help of his parents (who are pretty awesome), his aunt Pam and even his older brother, Jeff whom despite being a “total guy-guy who’s all “yo” and “dude” and grabbing at his crotch and belching” is still decent.

Totally Joe is aimed at a 12-14 year-old audience and if Joe does, at times, sound way more mature than the average teenager it’s pretty easy to cut him some slack. He’s had time to settle into himself and he’s smart. The novel manages to be both funny and affirming and Joe even manages some sympathy for the mostly undeserving Kevin Hennessey. It would be a great middle school novel to generate discussion about what it means to be yourself, be a friend and the positive outcome of standing up to the bullies. I really liked it.