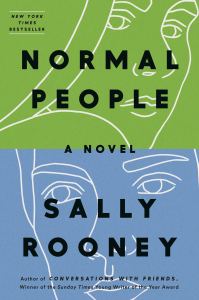 You know you’re getting old when…

That’s my main take away from Irish writer Sally Rooney’s second novel Normal People. The story follows the on again – off again – on again relationship between Marianne and Connell, a couple 18-year-olds (when the novel begins) who strike up a friendship of sorts when Connell arrives at Marianne’s house to pick up his mother, who is the housekeeper there.

The two would never have said a word to each other at school where Connell is “so beautiful” that Marianne liked to imagine “him  having sex with someone; it didn’t have to be her, it could be anyone. It would be beautiful just to watch him.”  Marianne herself is awkward and “has no friends and spends her lunchtimes alone reading novels.” The two of them just happen to be the smartest kids at school and so somehow, despite their awkwardness,  (because Connell,  despite his beauty, is awkward), the two form a relationship that shapes the next few years of their lives.

The thing with these two, though, is that they never seem to be playing the same game at the same time. Their attraction turns out to be mutual, but Connell suggests they keep their relationship a secret and when he finally betrays her, the two go their separate ways. It doesn’t matter, though, they are drawn to each other – moths to flame – and in that respect, I could so relate to their story. The two meet up again at Trinity College in Dublin, where suddenly Connell is the fish out of water and Marianne seems to have found her people. Rooney deftly handles the strange dance that happens when two young people desperately want to be together, but keep fucking it up.

So, is Normal People a book for an old doll like me? Am I the novel’s intended reader? Probably not, and I have a feeling that the ladies in my book club (for which this was our January 2020 pick) are likely going to pan the book. They’ll take exception to the lack of quotation marks for dialogue (and I knew that was going to bug me  – but ended up not being as annoying as I thought it might be) and they’ll probably dislike the melodrama inherent in a story about young love,  but I liked this book.

I was always falling in love at that age and I could see myself in both of these characters. Their need for connection, their disillusionment, their constant search for themselves was reminiscent of my own journey, and will likely ring true to anyone who has ever felt like an outsider. I found the book eminently readable, elliptical and troubling. When I finished the book – and I whipped through it in just a couple sittings – I found myself really trying to wrap my head around what I’d just read, and I think that’s the sign of something special.