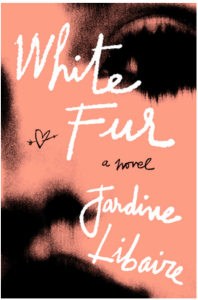 Funny, or maybe not, that the book I read right after Normal People was also about a love affair between two young people. Jardine Libaire’s novel White Fur shares a couple similarities with Sally Rooney’s novel; both books concern couples who are from very different social classes and both pairs of lovers have fraught relationships.

Jamey Hyde is a student at Yale when he meets Elise Perez. She lives next door to Jamey with Robbie, the guy who rescued her from sleeping in a parked car. Jamey and Elise couldn’t be more different, and you know what they say about opposites attracting.

“Is she frightening? Is she pretty?”

That’s what Jamey and his roommate, Matt, think when they first meet Elise and the truth is she is both. She’s run away from a messy home life, and she doesn’t suffer fools lightly.

She didn’t leave home last summer with a plan. Twenty years old, she never finished high school, she was half-white and half-Puerto Rican, childless, employed at the time, not lost and not found, not incarcerated, not beautiful and not ugly and not ordinary. She doesn’t check any box…

In some ways she is almost too tough, but something about her exerts a magnetic pull for Jamey. He’s heir to a vast family fortune and has never really had to work for anything in his life. Instead of making him a spoiled brat, though, he’s actually a decent guy. Before he even meets Elise, his life is sliding sideways. He and Elise shouldn’t work, but they actually make a strange kind of sense.

When the novel opens, Elise is holding a shotgun to Jamey’s chest and from there the novel flashes back to unravel the tale of their meeting, their tremendous sexual attraction, and their crazy summer in New York City.  Because you want to know how they ended up in a motel in Wyoming with a gun, it’s easy to turn the pages and Kirkus called this book one of “11 Thrillers for Summer.” But this isn’t really a thriller.

This is a book about love, about making your own way in the world in spite of the odds against you and in spite  of the privileges you’ve been given. The writing is beautiful and these are characters you won’t soon forget.

White Fur probably would have meant something different to me if I had read it 40 years ago, back when all my relationships felt a little bit like this one. I could relate, on many levels, to the crazy intensity these two felt for each other. But that’s not to say that I didn’t enjoy this book as a woman of a certain age because I enjoyed it a great deal.