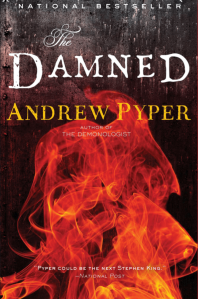 Canadian writer Andrew Pyper is often compared to Stephen King and I can see why.  Both writers skillfully find the scary in the every day, and in relationships which should be sacrosanct. Pyper mined that territory in his novel The Guardians  and he does it again in The Damned which hooks you in pretty much from page one.

Danny Orchard has come back from the dead on more than one occasion. He wrote about the experience in a memoir called The After a book that, many years later, keeps him busy at “dentists’ conventions and service club fundraisers” where he talks about what’s at the end of the long tunnel. Danny’s experience has inspired a group known as The Afterlifers, “a community for those who’ve traveled to the other side and returned.”

When Danny was sixteen he and his fraternal twin, Ashleigh (Ash), were killed in a house fire. Well, Ash was killed; Danny was saved. If saved is what you want to call it. I guess Danny would have a different opinion about it since he’s been haunted by his sister ever since. Although on the surface, it looked like Danny and his family had it all

Ash is clearly a psychopath and death doesn’t change that, so Danny’s life is pretty solitary until he meets Willa and her ten-year-old son Eddie.  He believes that he can keep them safe, but Ash isn’t about to let go that easily and Danny soon realizes that he is going to have to face her on her terms. If heaven is reliving the best day of your life over and over, hell is quite the opposite.

Pyper has created a compelling and nightmarish hellscape and, in Danny, a character readers will actually want to root for. At first he thinks that Ash just wants him to solve the lingering questions about her death. (Why was she in that abandoned house and what happened to the three friends she was supposedly with that day?) But Ash’s motives are far more sinister and when Danny returns to Detroit looking for answers he finds far more than he bargained for.

The Damned would make a terrific movie, but I’ve got a great imagination and Pyper is a great writer. I could see everything just fine, thanks very much. If you don’t mind white-knuckling it through a book, this is the story for you.

AT SCHOOL:
Join 444 other subscribers